Kevin Hart brings the laughs while Ice Cube brings the pain in the new Ride Along trailer. This could easily be one of the funniest films of the new year. 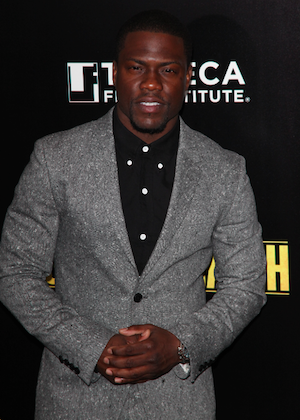 Can Ice Cube and Kevin Hart revitalize the buddy cop comedy with next year’s Ride Along? The story is a combination of Training Day, Father of the Bride and 48 Hours. In the film, Hart plays an aspiring cop who plans to marry the sister of one of the city’s toughest detectives.

Hart’s character Ben is a high school security guard with plans of joining the force. He’s in a relationship with decorated APD detective James’ (Cube) sister (Tika Sumpter) and desperately tries to prove his worth. James decides the best way for Ben to get on his good side is to go on a ride along.

During their day together, Ben quickly learns that working the streets is easier said than done. James has every intention of scaring the heck out of Ben while on the road. But his plan hits a snag when their wild night leads them to one of the city’s most notorious criminals. Ben’s involvement could inadvertently help James land one of the big fish.

Ride Along is directed by Tim Story and co-stars John Leguizamo, Laurence Fishburne and Bruce McGill. Story previously worked with Hart on the hit romantic comedy Think Like a Man. The film was a surprise blockbuster that spawned a sequel (Think Like a Man Too) that is slated to hit theaters next year.

Watch the trailer for Ride Along below:

Ride Along opens in theaters Jan. 17.

What do you think of the new trailer for Ride Along?