Community‘s Yvette Nicole Brown recently stopped by the super silly web series, the Love Me Cat Show for a little bit of fun. Instead, she discovered the gruesome story behind “Winter Wonderland.” 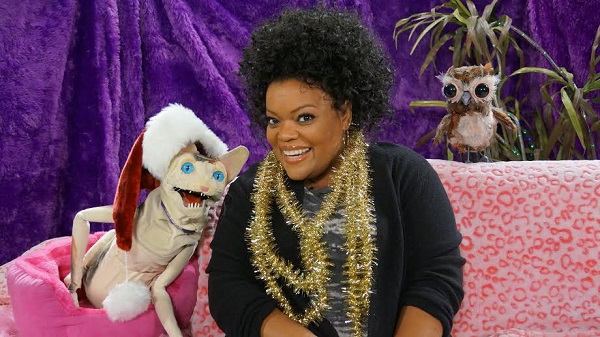 We’ve often thought that Community‘s Yvette Nicole Brown might be one of the most underrated actresses and comedians out there, but this clip from her recent appearance on the Love Me Cat Show proves it.

Flashback: Yvette Nicole Brown opens up about landing on Community >>

It takes a lot to hold your own against puppets. That’s especially true when you’re up against the ones on Love Me Cat. How do you compete with a hideous and hysterical hairless cat, an adorable mini-owl and a drum-playing robot? Everyone from the likes of Big Bang Theory‘s Mayim Bialik and Johnny Galecki have tried to figure it out. Even Lutz from 30 Rock took a stab. But no one succeeded quite as well as Brown on the holiday Christmas show.

After getting reeled into caroling (quite beautifully, we should add) with the cast of puppets, Brown and the gang begin to dissect the lyrics of “Winter Wonderland.” One thing leads to another and soon enough it’s decided that the people in the song were clearly up to no good and when Parson Brown (clearly the actress’ relative) called them out on their actions, they murdered him. This can only mean one thing: Come Easter, the mummy of Parson Brown is going to wreak havoc on Felix Bernard and Richard B. Smith, the songwriters.

Take a look at the hilarity:

Best news ever: Community will return >>

There you have it, guys. Perhaps the host put it best himself when he said, “‘Winter Wonderland’ is really more of a winter horror land of murder and elicit relations.” Never forget.

Community returns Jan. 2, 2014, on NBC, and you can catch tons more laughs from the Love Me Cat Show on MyDamnChannel.com/LoveMeCat. Adult diapers are strongly recommended.

Want more TV news, reviews, interviews and laughs? Sign up for our newsletter >>