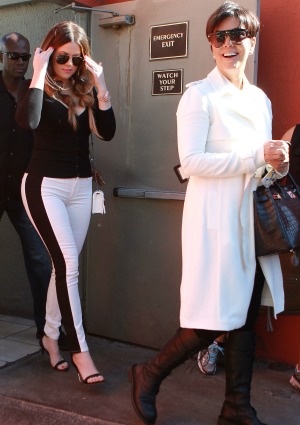 Momager extraordinaire Kris Jenner is speaking out about her daughter Khloé Kardashian’s divorce from Lamar Odom. The reality star says she still loves her soon-to-be ex-son-in-law, but she is incredibly impressed by her daughter’s strength during this trying time.

Jenner gave some insight into Kardashian’s frame of mind during her #cirocthenewyear pledge party Tuesday.

“I still love Lamar and I love Khloé, and I hate, hate they’re going through this,” she told People. “But if it’s something that Khloé feels she needs to do, then I’m 150 percent behind her. We all lean on each other, we have to.”

“What Khloé is going through is definitely challenging, I’m not going to lie. It’s also a very interesting time for her because it’s very cleansing,” she continued. “She’s also showed this side of her that I didn’t know she had. I always knew Khloé was strong, but I never dreamed that she had this kind of strength.”

“It’s definitely life lessons that she will be able to apply and use later in her life,” she said. “She’s learned a lot from this situation.”

As far as those rumors that Kardashian has already moved on with Rihanna’s ex Matt Kemp, Jenner says it just is not happening.

“He’s a family friend. We all live in the same neighborhood and we all hang out,” she explained. “He’s a great guy who we adore, but he’s just a friend. That’s it.”

Kardashian would also appreciate it if we knocked off the Kemp talk, too, and tweeted as much yesterday.