The Fault In Our Stars‘ movie poster has ruffled feathers with its frankness. Author John Green weighs in on why the tagline “One sick love story” gets his stamp of approval.

The Fault In Our Stars‘ movie poster, which features teen cancer patients Hazel and Gus canoodling along with her cannula in the grass, has plenty of potential to bring on bittersweet tears, but a few can’t get past the film’s twisted tagline. 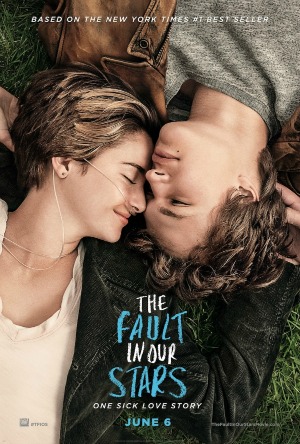 Another person with ruffled feathers tweeted, “So. The Fault in Our Stars tagline is a joke, right? A terrible, offensive joke?”Referring to the small bit of the newly released movie poster that reads “One sick love story,” a fan of author John Green’s young adult hit vented the words seem “to make a joke of their cancer, and the entire story.”

Shailene Woodley cuts off her hair for her latest role, and for charity >>

The Fault In Our Stars‘ tagline is decidedly not a joke, and Green did the honor of explaining precisely why the four carefully chosen words would undoubtedly be embraced by main character Hazel, who will be played in the film by 22-year-old actress Shailene Woodley.

“I mostly wanted something that said, ‘This is hopefully not going to be a gauzy, sentimental love story that romanticizes illness and further spreads the lie that the only reason sick people exist is so that healthy people can learn lessons.’ But that’s not a very good tag line. I like the tag line because it says, literally, the sick can also have love stories. Love and joy and romance are not just things reserved for the well.”

Along with applauding the studio including evidence of Hazel’s disability (the nasal cannula that helps her breath) front and center on The Fault In Our Stars‘ movie poster, Green added, “What matters most to me is that you’re seeing Shailene as Hazel and Ansel [Elgort] as Gus for the first time, and it seems like people are (mostly) pretty happy with what they’re seeing, which is what I was anxious about.”

To those who find the tagline about teens who are dying a bit too glib, he suggested a little movie poster makeover to block out the words, noting, “You can put duct tape over it or something.”

Despite a few who took offense at the tagline, many fans of the novel are overjoyed by the first glimpse at the film versions of Hazel and Augustus. We’re on board with those who are overrun by “all the feels” and are counting down the days until the movie’s June 6 release.

We’re in love with the “One sick love story” line regardless of who deserves credit for coming up with it. The dark humor, the twisted use of both the literal and slang versions of the word and the promise the film will rip off the fuzzy lens we’re used to seeing cancer through just as John Green did is fantastically promising.

How could we expect anything less from the novel that told us so bluntly, “There is no glory in illness. There is no meaning to it. There is no honor in dying of.”

We have to wonder if anyone who finds the tagline to be glib or offensive has even read the book, and dare say that if they haven’t they may not be able to handle a story about, as Hazel so eloquently put it from her mother’s perspective, “a kid who bites it from cancer.”

Thanks for the sick — as in crazy, cool, insane — tagline, movie poster people. Can’t wait to see more!

What is your reaction to The Fault In Our Stars‘ movie poster?