Wayne Coyne has been making a splash in the world of pop music, and he’s a surprising fan of one young musician. 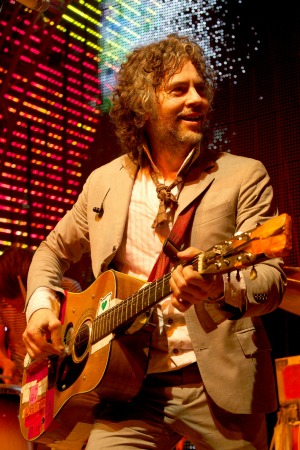 The Flaming Lips‘ Wayne Coyne is somewhat of a mystery. His band has had a busy year — releasing an album, The Terror, as well as Peace Sword, a “sci-fi inspired” EP, according to Rolling Stone. But the ’90s rocker seems to love young pop culture (he’s even working on an album with Ke$ha). Coyne opened up about the best and worst music of 2013, and surprisingly is a huge fan of Miley Cyrus. But that apparently has more to do with her attitude than her music.

“I like her aesthetic more than a Lady Gaga, who this year to me feels like, ‘Take me serious,’ and Miley’s like, ‘I don’t give a f***,'” he explained to Rolling Stone. “Which to me is always a lot more fun. I really like that thing where the people are inside the rainbow and they walk around. I just like that sort of stuff.”

Coyne added that culture tends to not judge those who have been in the industry for a while. He used Cyrus as an example of why we should be questioning everyone’s musical taste, no matter how much of a legend they are.

“I think Bob Dylan’s been kind of a curmudgeon and I think there’s a contingency of people out there who don’t want to say that,” Coyne explained. “And I say, why not? We pick on Miley Cyrus… but someone like Bob Dylan, we just protect him even though he’s sitting there, in all actuality, not really trying very hard.”

The Flaming Lips front man seems to really appreciate Cyrus’ honesty and aesthetic style, and it sounds like it may be because she reminds him of himself. Rolling Stone asked if it’s because the Flaming Lips were “dressing up on stage, dancing with animals, etc. years before she was?”

“That’s why I like it. I wouldn’t say we started it but it’s definitely up our alley,” Coyne explained. “Maybe that’s why I’m drawn to that more than, like I said, Gaga or whatever. All music is never just about the music. It’s personality-driven and it’s about the way they make news and what they say when they’re in the news. All that stuff plays into whether you like it or dislike it. I’d say it’s fun. I’d much rather have someone up there smoking pot and really living it and not worry about the consequences.”