Kristen Johnston has been ill for months. After a short absence from her TV Land show, she found out why she has been feeling so bad. 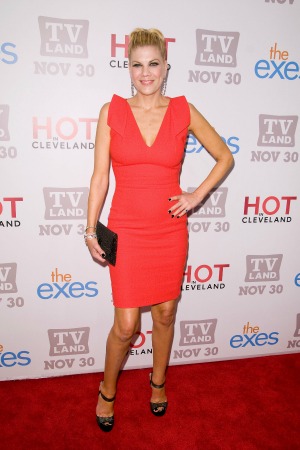 Kristen Johnston is a fighter. Not only has she battled her way through an addiction to drugs and alcohol, she revealed on Tuesday on her Facebook page that she’s in for the fight of her life.

She wrote, “Hey guys, I’ve put this off as long as possible, but it’s time for me to be upfront with you about something that’s been going on with me. Short(ish) version: I’ve been really, really sick since early Sept. Full body muscle weakness to the extent that just walking difficult, stairs impossible and I even need a neck brace to hold my head up.”

With these symptoms, it has made working on her TV Land show The Exes extremely difficult. Johnston revealed that “it’s kind of disastrous when you’re in a sitcom that requires tons of physical comedy.”

The actress had to take a break from the show and “spent two fun-filled weeks in November partying at The Mayo Clinic.” Those 14 days were important for Johnston because she finally received a diagnosis to her ailment. She has “a rare autoimmune disorder” called Lupus Myelitis.

She originally didn’t mention the specific illness because she wanted privacy. As the news spread across the internet, she knew she needed to address it on Wednesday.

“I’m not trying to be ‘coy,’ ‘relevant’ or ‘get attention.’ I just was diagnosed two days ago with a rare form of Lupus called ‘Lupus Myelitis’ — Google it. I’m not on my death bed… far from it. I’m gonna be fine,” she said.

Is Bruce Jenner getting his Adam’s apple removed? >>

As a result, Johnston missed two episodes of the cable show, but the producers found a capable guest star in her absence, Leah Remini. The former Dancing With the Stars contestant will be in two episodes beginning on Jan. 1.

The 3rd Rock from the Sun star promised fans, “You guys will laugh your asses off at her as Stuart’s sister. I promise, you won’t even miss me! (Well, maybe a teeny tiny bit?)”

The good news is that Johnston finally has a name for her disease after “4 months & 17 Drs [doctors]” and she can receive the proper treatment.