Tick-tock. Tick-tock. It’s almost the end of Matt Smith as the Doc.
Have you seen the trailer for his final day?
The Doctor’s last hours are borderline cray. 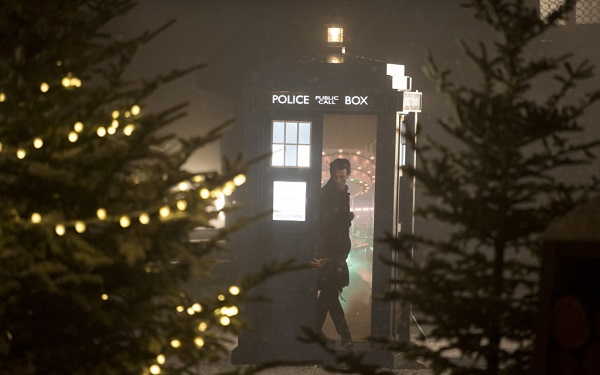 Will that be her only warning of the inevitable regeneration that will come at the end of the special? Will Eleven’s regeneration into the new version of himself (played by Peter Capaldi) be as shocking for her as it was for Rose when Nine regenerated into Ten? Probably not quite so since the last time we saw Clara (Jenna-Louise Coleman), she not only hung out with Eleven but spent time with Ten and the War Doctor, too. Still, we’re awaiting with much dread her reaction to Twelve.

No question about it: Smith and Moffat both believe the Doctor could be a lady someday >>

Though, from the looks of things, it’s possible we won’t see her full reaction until later next year. While BBC America has been keen to tell us that “The Time of the Doctor” will show the Doctor’s regeneration, Capaldi is not listed in the episode’s credits from their official emails. Then again, the on-screen TV Guide info on the Christmas special does list Capaldi. So, while we might see Eleven “die” (again) and we’ll surely witness the golden glowing of the regeneration process, we may not actually see the end result of Capaldi during the Christmas special. Meep! We can’t wait to find out for sure.

Though, to be clear: We’re incredibly excited for Capaldi’s version of the Doctor. We adore Eleven’s quirkiness and will continue to swoon for Smith through everything he does in his career. But we know regeneration is just a part of the process and we’re eager to meet this next mad man.

Because of our undying love for Smith, though, we’re glad BBC America will be offering up a full evening of Matt Smith goodness before the airing of the Christmas special. The afternoon will start with the “The Night of the Doctor” and segue into the 50th anniversary special, “The Day of the Doctor.” After that refresh of the most recent adventures of Eleven and Clara, BBC America will air Farewell to Matt Smith.

The goodbye special will be followed by the Doctor Who 2013 Christmas special — and Smith’s last episode — “The Time of the Doctor” at 9/8c.