Marvel has finally cast the right actor to play Ant-Man. One of Hollywood’s biggest comedic stars is the newest member of their team. 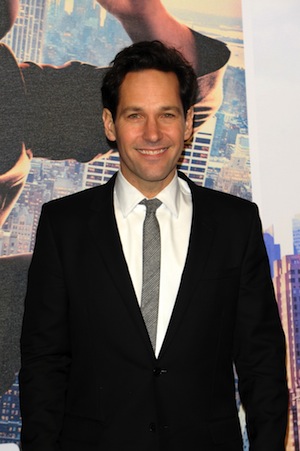 Marvel Studios has found their next big superhero. After repopulating The Avengers with the Scarlet Witch and Quicksilver, they’ve shifted their focus to Ant-Man. It’s the long-developing superhero movie from writer-director Edgar Wright.

According to The Wrap, Marvel is in talks with Paul Rudd to star as Hank Pym aka Ant-Man. The Anchorman 2 star was previously rumored for the role alongside Joseph Gordon-Levitt. Apparently, Rudd was always the frontrunner, but Gordon-Levitt’s attachment to a rival film (DC Entertainment’s Sandman) made the decision clear.

Wright co-wrote the script with Joe Cornish, who previously worked with him on the action-comedy Hot Fuzz. Cornish also directed one of the most underrated films of 2011: Attack the Block. The basic premise of Ant-Man centers around Pym, a scientist who invents a substance that allows him to manipulate his size. He can go from being as tall as a house or as small as, well, an ant.

Traditionally, Ant-Man has been part of The Avengers’ team, yet he didn’t appear in the 2012 film. He may also be absent from the sequel, The Avengers: Age of Ultron, which opens May 1, 2015. The Ant-Man movie is supposed to kick-start Phase Three of the Marvel Cinematic Universe. Perhaps he’ll appear in the inevitable third Avengers?

Production on Ant-Man is expected to start early next year.

What do you think of Rudd as Marvel’s newest superhero?