Bad weather forced Prince Harry and the other team members out of the South Pole where they were participating in the Walking With The Wounded race event. 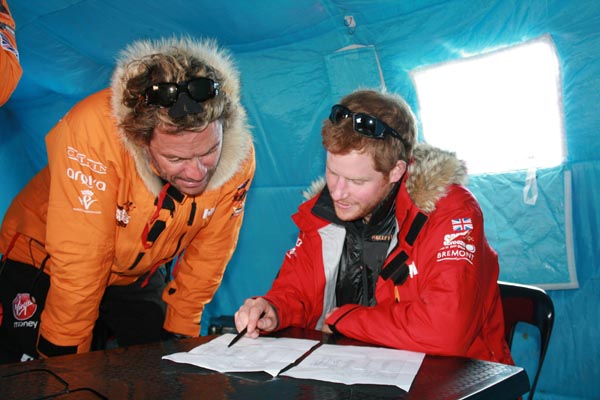 Prince Harry, his teammates and the rest of the teams had to hightail it out of the South Pole due to a big storm headed for the Antarctic.

While Harry and the rest of the teams completed the 208-mile trek to the South Pole on Dec. 13, they were not due to leave until the end of this week. However, due to the weather, they had to exit earlier if they were to be home in time for Christmas.

“Now on a very blustery, very snowy day, with a blizzard coming, we are about to fly out to, well we are about to be dragged out on the back of a Ski-Doo to our Aleutian aircraft,” the expedition director, Ed Parker, said. “That Aleutian aircraft will be flying us back to Cape Town, where we have a few days of decompression before returning home to our loved ones.”

Parker added that the walking teams’ efforts raised a lot of money for the Walking With The Wounded charity, which helps families of wounded soldiers. “That and making people aware of how extraordinary our wounded men and women are and how they are able to challenge themselves in the future,” the director continued. Of course, Parker was also very appreciative of the hard time they all put into the event.

While the teams were originally going to race each other on their journey to the South Pole, inclement weather dictated otherwise. Parker announced during the event that the teams were just going to keep moving at their own pace as permitted from that point on.

The walkers were comprised of three teams: American, British and the Commonwealth. As part of the British team, Prince Harry was joined by other celebrities including Alexander Skarsgård from True Blood and The Wire‘s Dominic West.