Kourtney Kardashian and Scott Disick are not ending their relationship despite recent reports that the couple is finished. 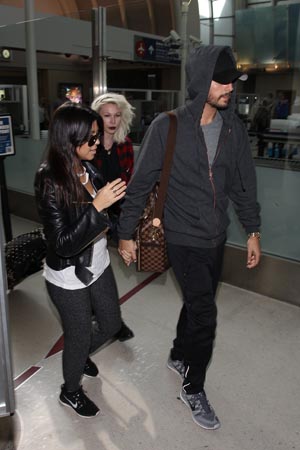 New reports are claiming that Kourtney Kardashian and Scott Disick are on the verge of breaking up and that they’re not currently living together.

According to In Touch magazine, the reality pair is done and Disick is not even living in the family home anymore. Supposedly, he’s living at the Montage Beverly Hills Hotel in Los Angeles.

The story goes even further, claiming that Disick has been with another woman and has been cheating on Kardashian for some time.

However, Toofab has reached out to sources close to the Kardashian clan and they insist that “the two are still very much together and any rumors of a split are ‘ridiculous.'” Disick and Kardashian were even seen together on Monday going for a ride in their new car after being “cozy all month.”

More evidence of their intact relationship came when the duo traveled to Tucson to visit Kardashian’s former school, the University of Arizona. Disick has also been gushing over his sweetie on Mobio, telling fans how he loves “everything” about her.

Kardashian and Disick are not married, but they have two children together, Mason, 4, and 17-month-old Penelope. Many fans are anxiously awaiting an engagement between the two, but they don’t seem very interested in going that route at the moment.

Meanwhile, Kim Kardashian is doing equally wonderful, enjoying life with her soon-to-be second husband Kanye West and their new daughter, 6-month-old North West. However, Kardashian’s other sister, Khloé, has not been so lucky in love. The younger Kardashian just filed for divorce from her husband of four years, Lamar Odom.