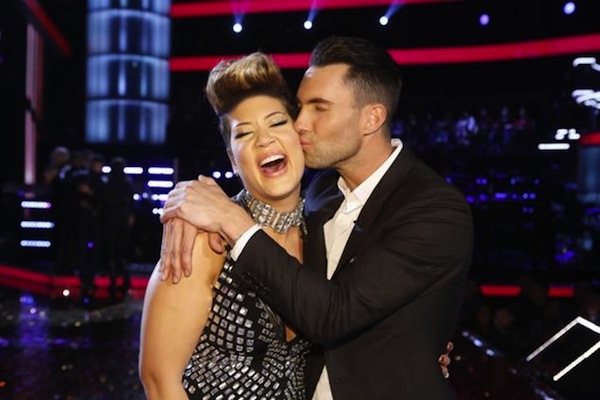 The finale of The Voice felt less like a singing competition and more like a live concert event. With musical guests including Lady Gaga, Paramore, Ne-Yo and One Republic, it was easy to forget what show you were watching and instead focus on the loud and proud performances.

It wasn’t until the end that we realized: Oh yeah, someone is going to take home the gold. The title of Season 5 winner went to 28-year-old Tessanne Chin from Adam Levine‘s court, who became a fan favorite in the last couple of weeks.

The Voice finalists: Where are they now? >>

After winning the competition, Chin described her feelings. “It’s out of body. I feel like: Is this really happening? You know? This can’t be real. Like unbelievable. Unbelievable.” 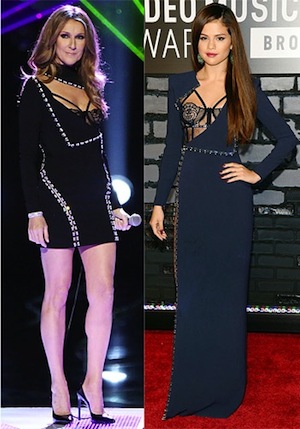 During the finale, Chin performed with Celine Dion, singing Dion’s classic, “Love Can Move Mountains.”
Sure, the song was great, but what garnered even more attention was Dion’s revealing Versace zipper dress. Selena Gomez wore a similarly styled dress to the 2013 MTV Video Music Awards just a few months back.

Also adding to the duets of the night and similarly flashy styles were Christina Aguilera and Lady Gaga, who teamed up for the first time to sing Gaga’s “Do What You Want.”

The Voice: Where have we seen Lady Gaga’s dance moves before? >>

Jacquie Lee from Christina Aguilera’s team took the title as Season 5 runner-up. During the finale, she sang “Ain’t It Fun” with Paramore. Will Champlin, from Team Adam, came in at third place. He also took to the stage for a duet during the night, singing a rendition of “Wake Me Up” with Aloe Blacc.

At the end of the show, Chin sang an original song called “Tumbling Down,” which was written for the Season 5 winner by One Republic’s Ryan Tedder.

Levine commented on his big win of the night, saying, “In the seasons past where I have kind of fallen short — in my opinion, if I’m looking at it analytically — it’s by not being able to give enough because I’ve been super-busy. So I tried to kind of thin things out so I could devote most of my time to just getting to know these guys and instill them with the confidence that they needed to win.”

Do you think Tessanne Chin has staying power?

Images courtesy of NBC and Getty