Kim Kardashian has shed her baby weight and she’s looking great, but apparently looking that good costs a lot of money, which Kanye West is reportedly willing to pay for. 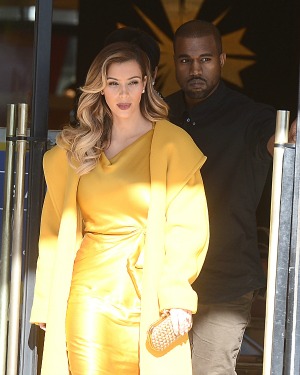 Kanye West wants his lady looking her best at all times, so she’ll have her every need met while she accompanies him on the North American leg of his Yeezus tour.

Kim Kardashian is apparently a tad fussy when it comes to letting people do her hair and makeup, and expertly style her, so she will have no one but the best and that’s her own team, fondly referred to as the “glam squad.”

The Keeping Up With the Kardashians star reportedly refuses to use anyone else but the people she trusts, and that means her team is on call, even if the call comes in the middle of the night.

A source revealed to Radar Online: “Kanye has told Kim he will spare no expense to make her look ready to go to a major photo shoot whenever she desires.”

“So, Kim’s hairstylist, makeup artist and stylist, all based in Los Angeles, are on call 24-7, ready to get on a private jet to be whisked to her location.”

“Kim only trusts her team to make her look gorgeous and doesn’t want to work with outsiders. This doesn’t come cheap, and Kanye will shell out $250,000 just while he is on tour for Kim’s glam squad. The money doesn’t mean anything to him because Kanye wants his lady to look perfect.”

The couple are known to be image conscious and obsessed with being trendy when it comes to fashion and beauty, so it is not so surprising they would be willing to fork out a small fortune on styling, hair and makeup for just a few months.

However, there may not be that much truth to the rumor that the “Bound 2” rapper wants to spend tons of cash on his fiancée’s appearance. According to E! News, the 33-year-old beauty’s rep has denied the allegations.