Tina Fey and Amy Poehler have become the dream team of Hollywood hosts. But would they ever take on the granddaddy of award shows? 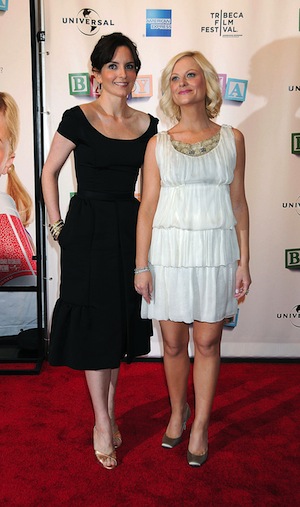 Actresses Tina Fey and Amy Poehler are preparing for Round 2 of the Golden Globes. They’ll return to host the ceremony, which mixes film, television and booze. The Golden Globes awards show is one of the most anticipated ones of the year, but it is not the most coveted. That title goes to the Oscars.

The Academy Awards show is in the big leagues and on a whole other level. That’s why the academy has such a hard time finding hosts. Fey and Poehler recently spoke to Entertainment Weekly about the possibility of taking it on.

“I would never want to do it,” Fey said. “I think that’s just a much harder, much more time-consuming job and a much more intimidating room. Even though it’s a lot of the same people, they’re just really nervous that night. That night is career-making or – breaking for people. Scary.”

Poehler is on the same page. She’s also not interested in hosting the Oscars. She prefers the intimacy of the Golden Globes. “Round tables and drinking can help with laughing, and it’s tougher when you’re in stadium seating….. The Golden Globes are just loose and weird enough that they fit us.”

In recent years, the Oscars hasn’t had much luck with emcees. Remember Anne Hathaway and James Franco? Or what about Seth MacFarlane, who was burned for his raunchy song and dance numbers? We can’t blame Fey and Poehler for shunning the idea. An Oscars hosting gig seems like it could be kind of a monster.

Who do you think should host the Oscars next year?