This year, Hollywood’s biggest stars battled for box office supremacy. But only one holds the title of Forbes‘ top-grossing actor of 2013. 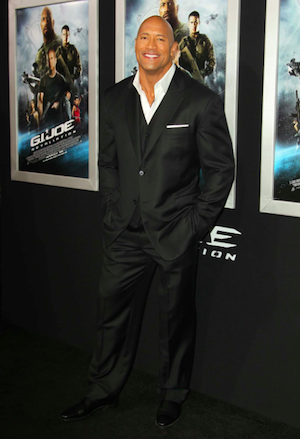 The year 2013 is coming to a close and it’s time for Forbes‘ annual box office tally. It has done the math and uncovered the top-grossing actor of the year. Who has starred in more blockbusters? Who can be named king of the cinema?

According to the site, Dwayne Johnson has that honor. The wrestler-turned-actor’s films brought in some serious bank. He has Snitch, G.I. Joe: Retaliation, Pain & Gain and of course, Fast & Furious 6 to thank for his $1.3. billion gross.

Johnson has been acting professionally for more than a decade and his hard work has paid off. He’s become synonymous with action franchises. Not only does he lead them, he revitalizes them. The Fast & Furious franchise and the G.I. Joe series are both a testament to that fact. The latter could have easily gone downhill, but it came back bigger and better.

G.I. Joe: Retaliation had a worldwide gross of $375.7 million compared with G.I. Joe: The Rise of Cobra’s $302.4 million. Do you see what adding a little Johnson can do? Next up, the actor will tackle the iconic tale of Hercules alongside Joseph Fiennes and John Hurt. He’s also part of Fast & Furious 7, which is still in production limbo.

What do you think of this year’s box office kings and queens?