Bruce Willis is 58 years old and has four kids, but it looks like another one is on the way. His wife showed up to an event over the weekend with a very noticeable baby bump. 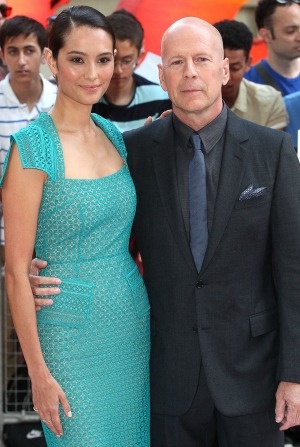 It looks like Bruce Willis is going to be a dad once again. His wife, Emma Heming, is reportedly expecting their second child.

Bruce Willis is cranky about his acting career lately >>

The couple already have a 20-month-old daughter, Mabel. Heming appeared at a farmers’ market in Los Angeles, California, on Sunday with Mabel — and reportedly had a growing baby bump.

A source confirmed the news to People on Tuesday although Willis’ rep wouldn’t comment on the news. Heming gave birth to Mabel in April 2012.

A source told Us Weekly that, “Things are a bit smoother this time around for Bruce. [He is] very present and amazing with Mabel.” The source added that Heming is “a very devoted mother, and supportive of him, so when he needs to work she steps up her mommy game.”

Though Willis is nearly 60 years old, he is still very much enjoying fatherhood this time around.

Bruce Willis is a legend in his own time >>

“I’m happier than I’ve ever been. I’m changing diapers like a champ,” Willis told Zoomer in June (via People). “What I’ve also discovered is how much love I feel for our baby. I think I’m even more open and more giving as a father now. I pay more attention now because I value it more and I’m less caught up with my career.”

Willis just celebrated 25 years since the movie Die Hard hit theaters and is filming The Prince, a movie that puts him in a dad film of a different kind. According to Deadline, the film also stars Jason Patric, John Cusack, Curtis “50 Cent” Jackson, Johnathon Schaech and others, and follows a mob enforcer who returns home when his daughter disappears.

Congrats to Willis and Heming on the news of the newest addition to their family!