There are some huge names being inducted into the Rock and Roll Hall of Fame next year — see how they reacted to the news! 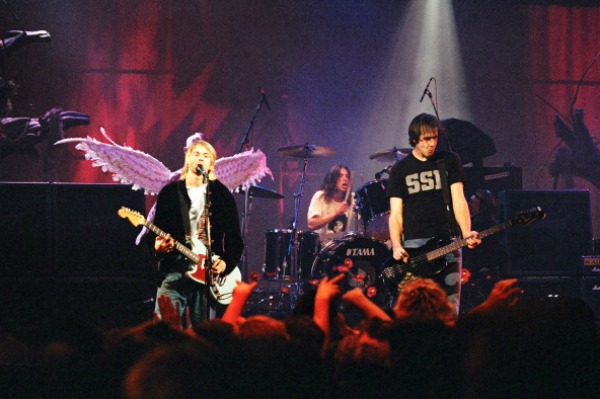 Nirvana, Kiss, The E Street Band and Hall and Oates are among the 2014 inductees into the Rock and Roll Hall of Fame, the organization announced today.

The decision is sure to be bittersweet for several. The year 2014 will mark the 20th anniversary of the death of Nirvana’s lead singer Kurt Cobain. Bruce Springsteen and the E Street Band lost their beloved sax player Clarence Clemons less than two years ago. And Ronstadt announced this year that Parkinson’s disease has robbed her of her golden voice.

“For once… I’m speechless,” Grohl said in a statement. “From the basements, to the dingy clubs, to the broken down vans, to… the Rock and Roll Hall of Fame. I’d like to thank the committee not only for this induction, but also for recognizing Nirvana for what we were: pure rock and roll. Most of all, thank you to all of the fans that have supported rock and roll throughout the years, and to Kurt and Krist, without whom I would not be here today.”

Novoselic added, “This is a great honor. Thank you to the people who nominated and voted for us. Thank you most of all to Kurt Cobain. And to everyone who’s kept rock music going strong for 60 years and counting.”

While Kiss members Gene Simmons and Paul Stanley have always been rather blasé about the whole Hall of Fame thing, today they seemed quite thrilled with the turn of events.

“To the Kiss Army, Ace, Peter, Eric Carr, Vinnie, Mark, Bruce, Tommy and Eric Singer, Bill Aucoin, Doc McGhee and to my partner of 40 years, the ever youthful Paul Stanley… and all the members of the Kiss Family. This honor is for you. Forty years of rockin’ and still going strong,” Simmons said.

“The spirit of rock and roll for me has always meant following the paths I choose regardless of what my critics or my peers think,” added Stanley. “For 40 years Kiss has built an army that apologizes to no one and I’m honored to be inducted into the Rock and Roll Hall of Fame knowing we have remained true to ourselves and our fans.”

Gabriel missed his first induction ceremony as a member of Genesis, but said he will definitely be there this time.

“There was no indication at the time I’d have a second opportunity,” he told Rolling Stone. “I’m very grateful to have gotten in again. It’s a huge honor since it’s for your whole body of work and not just a specific project.”

Ronstadt was not very confident she’d be there because of her health issues. “My health is not great right now,” she told Rolling Stone. “It’s most likely I that I won’t be able to make it to New York in April. Travel is very difficult for me.”

Daryl Hall of Hall and Oates could not be more surprised by their inclusion. “It was a bit of a surprise to me,” Hall told the mag. “I’ve always been sort of on the other side of the fence with the old guard and the powers that be… This whole new generation of people are looking at me and John in a different way.”

Controversial singer-songwriter Stevens was thrilled with the news. “It will certainly bring happiness to a lot of my loyal fans,” he said in a statement. “And fulfillment to all those who have long-campaigned for it, not to mention how kinda embarrassingly good it makes me feel too. The sleepy Peace Train is beginning to chug its way slowly uphill, again.”

The induction ceremony will take place on April 10, 2014, at the Barclays Center in Brooklyn, New York. Tickets for the show, which will air on HBO in May, will go on sale in January.