From a 16-year-old activist who survived being shot by the Taliban to a country singer going to bat against weight bullying, women have a lot to be proud of in 2013. We look back on some of the year’s most inspirational words. 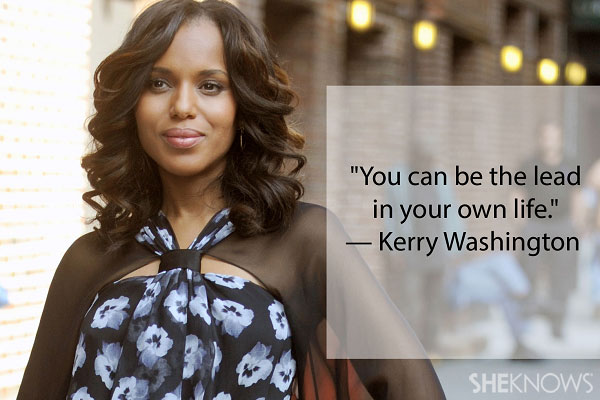 Sometimes, we all need a little reminder that we’re not simply extras behind the scenes. In her interview for Glamour‘s 2013 Women of the Year issue, Kerry Washington spoke of her role as Olivia Pope in the wildly popular series Scandal, saying it “teaches women that you don’t have to be an accessory.” 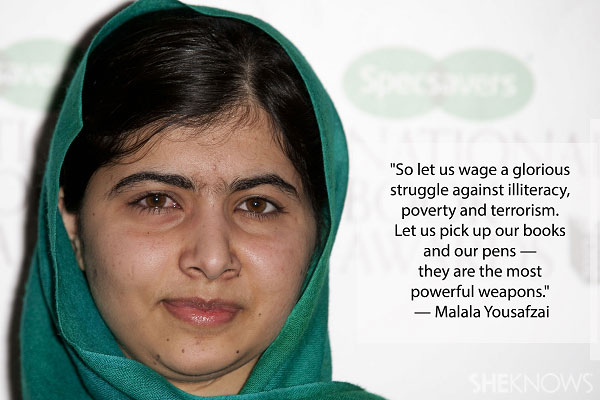 At only 16 years old, Pakistani student and activist Malala Yousafzai has become a global symbol of courage. At the tender age of 11, she began blogging about life under the thumb of the Taliban — and particularly about her strong beliefs in education rights for girls. Last year, the Taliban shot her in the head and neck in an attempt to execute her. Her response? “I don’t want revenge on the Taliban, I want education for sons and daughters of the Taliban.” 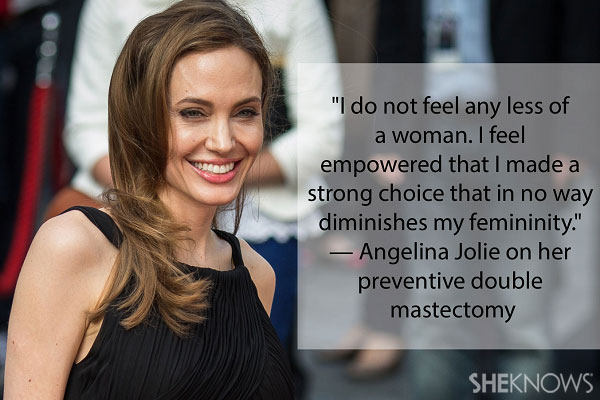 In a brave and bold decision, Angeline Jolie revealed in May that she underwent a preventive double mastectomy after doctors informed her she had around an 87 percent chance of getting breast cancer. Jolie explained her decision in an op-ed piece in The New York Times, noting that the decision was by no means easy, but she was happy to know her breast cancer risk had dropped to less than 5 percent. 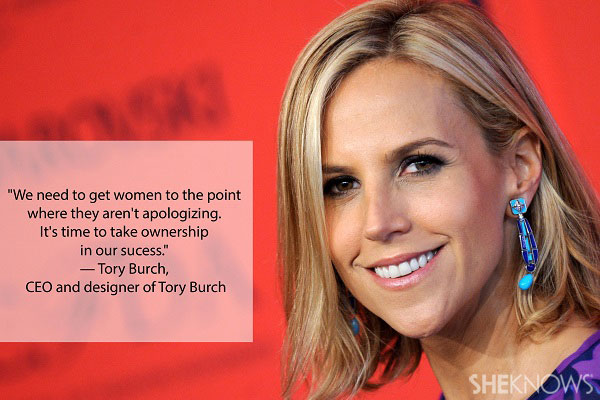 With men still holding the majority of power positions in business, female entrepreneurs and CEOs are stepping into the spotlight to bolster the confidence of women everywhere. Tory Burch, the extremely successful and popular founder of her eponymous design house, took to the podium at the American Express OPEN CEO Bootcamp in September to remind women that “ambition isn’t a four-letter word.” 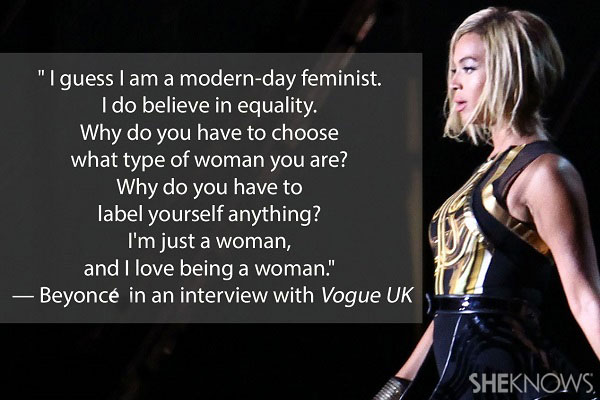 Through her lyrics, Beyoncé encourages women to be fierce and independent. Onstage, she commands attention with provocative ensembles and sexy dance moves. But she’s also a devoted wife (to rap mogul Jay Z, natch) and mother. In the May cover feature for Vogue UK, she reiterates that feminism today is about being self-sufficient, audacious and, in a word, woman. 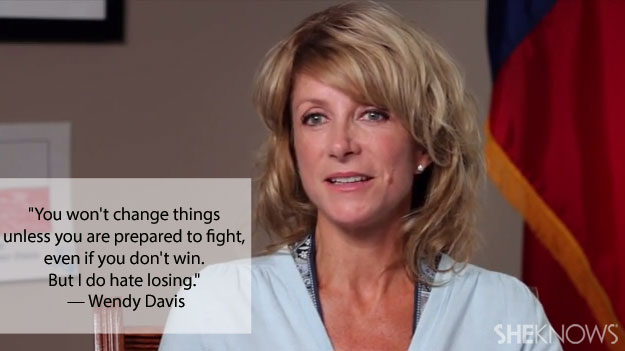 Wendy Davis isn’t one of those silver-spoon politicians, born and bred of a white-collar family. Rather, she’s the daughter of a single mother who raised four children with no support — and who herself was a teen mom. Ever the fighter, though, she graduated from Harvard Law and, in June of this year, attracted national notoriety when she pulled an 11-hour filibuster in an attempt to block an anti-abortion bill. 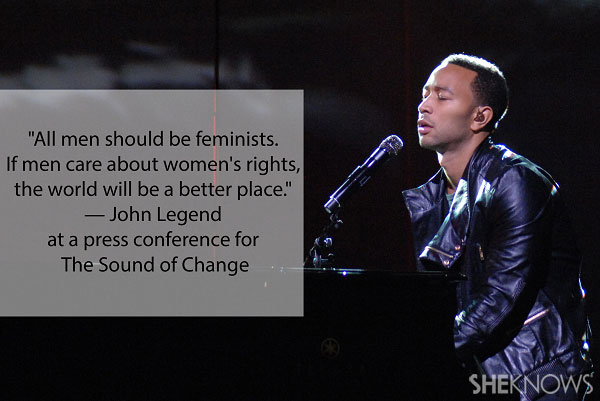 John Legend’s talented, he’s charming, he’s handsome… and, this year, he performed in a concert series to raise money for an organization devoted to improving women’s well-being around the world. During a press conference for the event, Legend won our hearts when he spoke out about feminism. 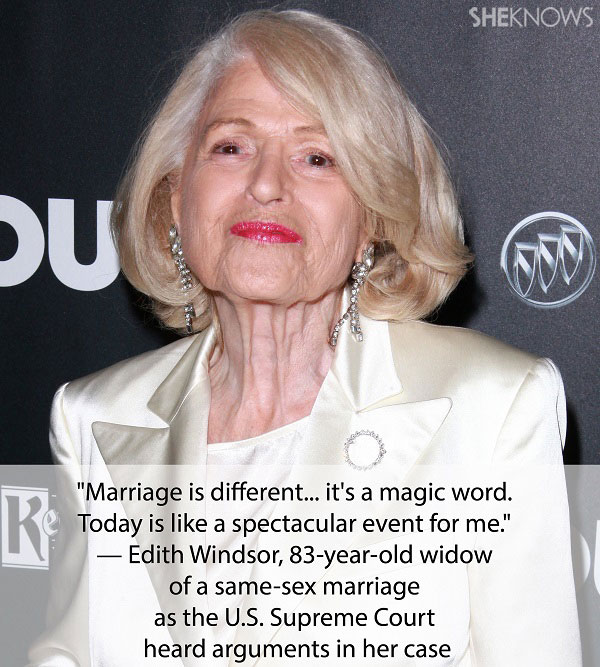 For more than 40 years, Edith Windsor walked through this world with the love of her life by her side. That love, it just so happens, was a woman —Thea Spyer. After Spyer’s death, Windsor became the Defense of Marriage Act (DOMA) plaintiff who made history in June when the Supreme Court ruled in her favor. In celebration of her fight for marriage equality, Time magazine named her one of its People of the Year. 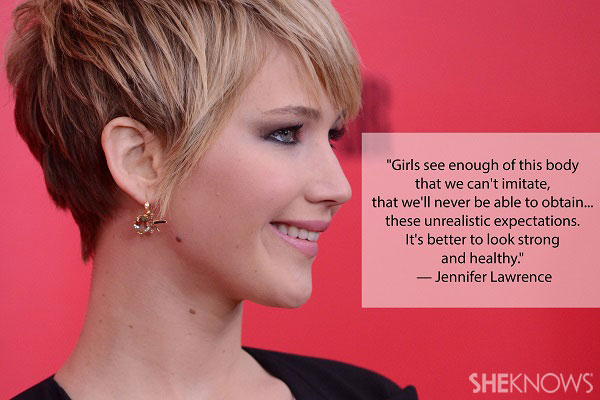 Jennifer Lawrence is a bit of a wild card — just another reason we love her. One issue in particular she certainly hasn’t bitten her tongue about is body image. Although it seems hard to believe she would be criticized for her weight, it has happened, leading Lawrence to speak out about “the opportunity to rid ourselves” of the unattainable body image idealized in the entertainment industry. 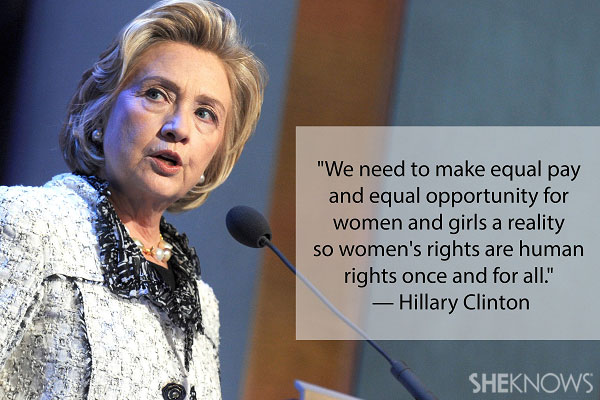 At the 4th Annual Women in the World Summit, Hillary Clinton echoed the sentiment from her memorable 1995 speech at the World Conference on Women: Women’s rights are human rights. She stressed that the fight for such “is unfinished around the world, where too many women are still treated at best as second-class citizens, at worst [as] some kind of subhuman species.” 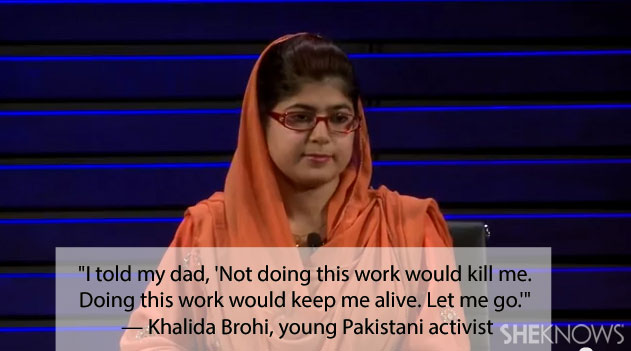 A youth activist and social entrepreneur, 22-year-old Khalida Brohi has made it her mission to help end the custom of honor killing in her country of Pakistan and beyond. To this end, she established the Sughar Program, which provides “socio-economic empowerment to tribal women” to encourage female entrepreneurs, contribute to a decrease in honor killing and promote beautiful, peaceful traditions. 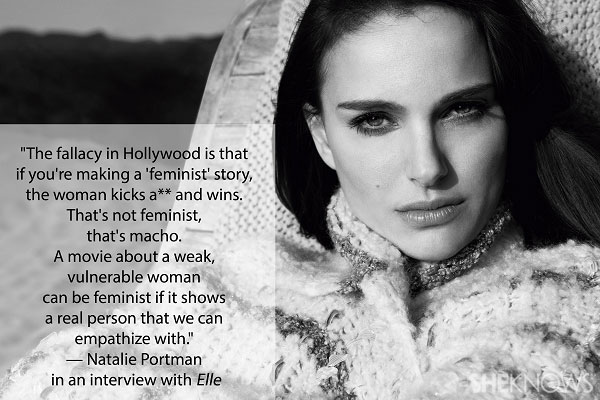 Could we love Natalie Portman any more? We didn’t think it was possible, but the actress has endeared herself to us even further by offering a fresh, smart perspective on the feminist character as portrayed in Hollywood. We hope the industry will take her cue and begin to offer women more nuanced roles. 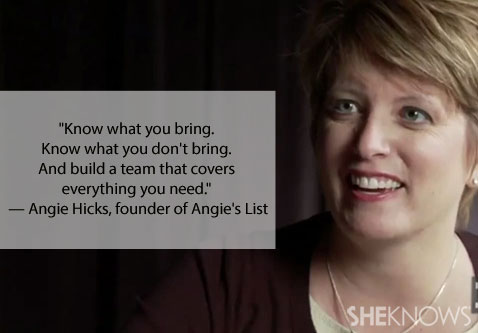 From knocking on neighbors’ doors to collect ratings on local contractors to serving over 2 million members, Angie Hicks has come a long way since she first cofounded Angie’s List. And she wants to make sure other women know they are just as capable of such success. The entrepreneur took the opportunity to offer words of wisdom at the American Express OPEN CEO Bootcamp in September. 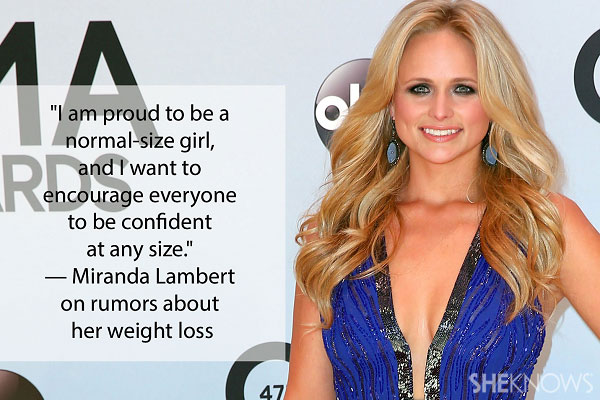 Country singer Miranda Lambert has never shied away from standing up for what she believes in — a fact made all the more evident this year when tabloids began gossiping about the root of her recent weight loss. The saucy songstress took to her Facebook page to set the record straight about her normal size. 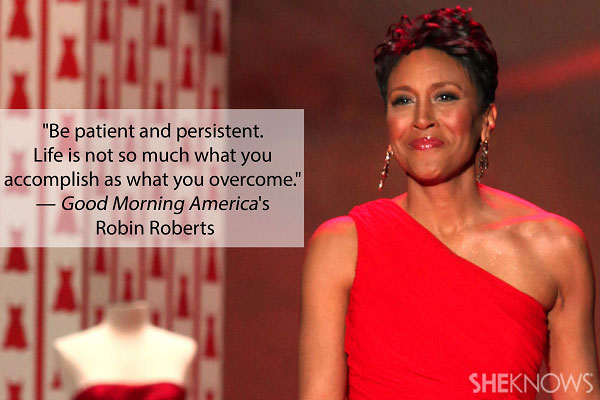 The world has watched Good Morning America anchor Robin Roberts battle breast cancer in 2007 and myelodysplastic syndrome (MDS) last year and, through those battles, teach us all about the true strength and grit of the female spirit. Her words are a gentle reminder we can overcome anything. 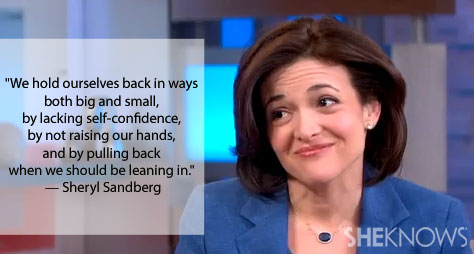 Talk about inspiring! Sheryl Sandberg is the COO of Facebook, a former VP at Google and a past chief of staff for the U.S. Secretary of the Treasury. So what does this gutsy woman have to say to the rest of us? Lean in (also the title of her first book, released this year) and be part of the dialogue. 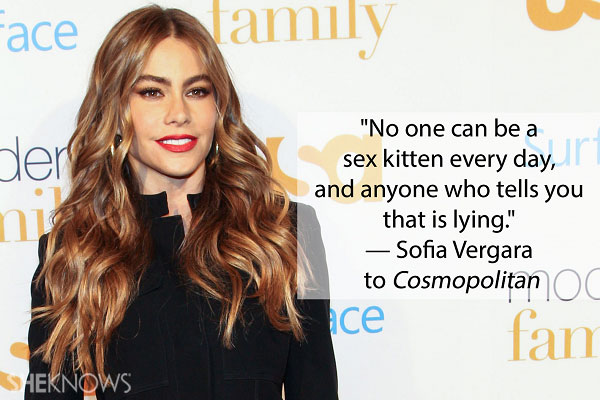 With the success this year of oversexualized songs like “Blurred Lines” and twerking stars like Miley Cyrus, it’s refreshing to hear a star remind us that women don’t have to — not to mention, really can’t — walk around 24/7 in a hypersexual state. No guilt, no shame… just truth (and relief). 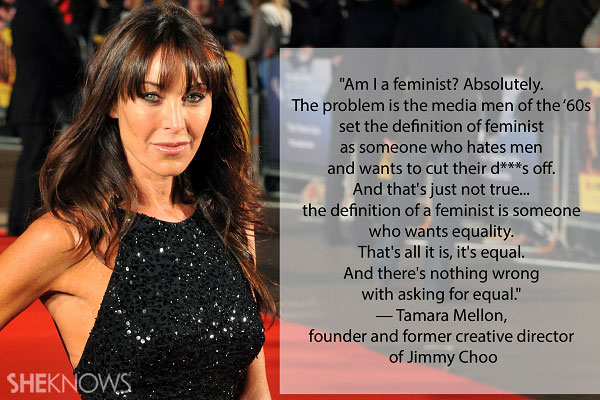 Thank you! The perpetuation of this Lorena Bobbitt version of feminism has got to go! In an interview for The Guardian‘s “Women in Leadership” series, Tamara Mellon says what we’ve all been thinking — and that we wish more people would actually hear. 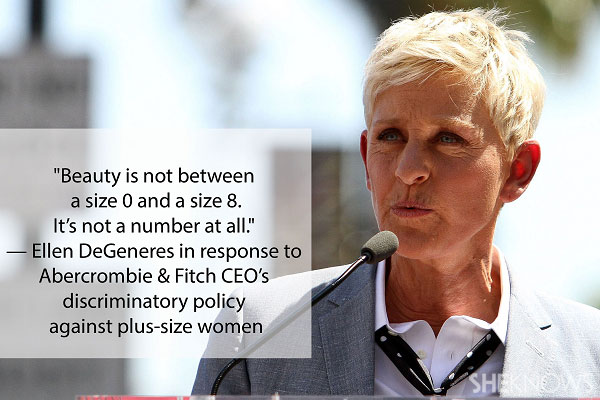 Abercrombie & Fitch CEO Michael Jeffries found himself in seriously hot water this year when an old interview with Salon magazine surfaced in which he called the brand exclusionary, particularly in regard to curvier gals. Proving for the billionth time why we love her so, Ellen DeGeneres confronted Jeffries on her show by addressing his idiotic comments and coining the incredible catchphrase, “Fitch, please!” 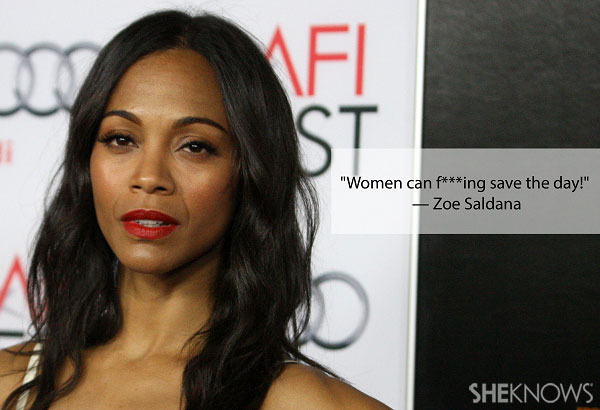 During an interview with Flare magazine, Zoe Saldana couldn’t hide her passion about the power of womanhood. “Women aren’t wimpy,” she exclaimed, “They can f*****g save the day!” She went on to point out that many women now support their families and make more than their male partners.

Tweet ’em, send ’em, pin ’em — save the pics above and then pass the good word(s) along.