Sorry, fellas — Kelly Rowland is officially off the market. She’s finally come clean about her relationship status with her rumored fiancé. 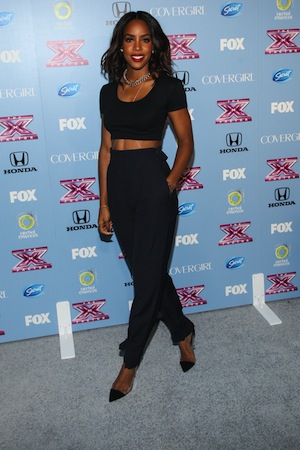 For weeks, we’ve speculated that singer and X Factor judge Kelly Rowland was engaged. After initial reports she refused to give a solid confirmation, but now the cat’s out of the bag. Rowland recently sat down with Queen Latifah and spilled the beans.

According to E! Online, the singer will appear on Wednesday’s episode of The Queen Latifah Show where she discusses her engagement to music manager Tim Witherspoon. She confirmed, “He put a ring on it.” She even showed the audience the beautiful (and large) rock on her finger. Mr. Witherspoon has great taste.

Rowland admitted that the engagement’s been a long time coming. “It’s been a while,” she said. “We’ve kept it very, very low — for years, to be completely honest.” Rowland is typically guarded when it comes to her love life. Like her gal pal Beyoncé, she knows how to keep a relationship under wraps.

Perhaps the most interesting aspect of Rowland’s fiancée status is how it happened. Witherspoon proposed to her via video chat! “He asked me first on Skype,” she recalls, “And I was like, ‘We’re so far away from each other.'”

Rowland gushes, “I remember we were both just kinda like, honestly, just staring at each other. And he asked me, and it was just that simple to say yes. I was like, ‘I got my best friend to ride through life with.’ He really is my best friend.”

Congrats to the happy couple.