Jennifer Lawrence thinks that fat-shaming is just as harmful to TV viewers as cigarette ads or swearing and should be regulated that same way. 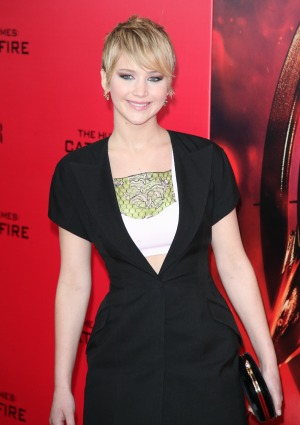 Displays of sex, smoking and even swearing are heavily regulated on network television — and Jennifer Lawrence has something she would like to add to that list of taboos.

The American Hustle star, named as one of Barbara Walters’ Most Fascinating People of 2013, thinks that it should be illegal to broadcast any type of fat-shaming on TV.

“Because why is humiliating people funny?” the Oscar winner said in an interview with Walters. “I just think it should be illegal to call somebody fat on TV.”

Lawrence, who has a healthy, strong and athletic figure — not an emaciated stick like many fashion mags would have us believe is the beauty ideal — has received her share of criticism over her body and says enough is enough.

“I get it, and, and I do it too, we all do it,” she told Walters. “[But] the media needs to take responsibility for the effect that it has on our younger generation, on these girls who are watching these television shows, and picking up how to talk and how to be cool.”

“I mean, if we’re regulating cigarettes and sex and cuss words, because of the effect they have on our younger generation, why aren’t we regulating things like calling people fat?” she said.

In fact, in an interview with the BBC last month the actress revealed that she fought to make sure Katniss had some meat on her bones just to make a point to young girls.

“When we were doing the first The Hunger Games, it was a big discussion, ’cause it’s called The Hunger Games — she’s from District 12, she’s obviously underfed, so she would be incredibly thin. But I just kept saying, ‘We have the ability to control this image that young girls are going to be seeing,'” she said. “Girls see enough of this body that we can’t imitate, that we’ll never be able to obtain, these unrealistic expectations, and this is gonna be their hero, and we have control over that.”