What hints are in the new Switched at Birth Season 3 promo video? We break down the facts and glean every detail we can from the 30-second preview. 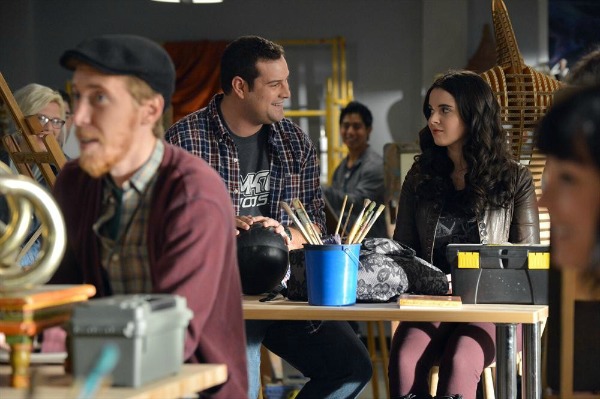 After a long hiatus, Switched at Birth will finally return on Monday, Jan. 13 with its Season 3 premiere “Drowning Girl.” Judging from the title, it sounds like one of the girls is going to be dealing with some major issues. Considering where the Season 2 finale left Daphne, she’s likely the drowning girl referred to in the title, but on this show you never know. So it’s also entirely possible that Bay or even someone else could be that girl.

Here’s how ABC Family describes the episode in the official synopsis:

Senior year means big changes for Bay and Daphne, as the Carlton School for the Deaf receives an influx of hearing students who are not happy to be there. Daphne begins working at a free clinic as part of her probation from the Senator Coto blackmail scandal, and bonds with a pre-med student with a spinal injury. Bay is inspired by her art teacher and surprised by her jock classmate when she takes an art class at a local college. Toby tries to unite a divided Carlton by coaching girls’ field hockey, and Kathryn dips her toes into new territory when she makes friends with a gregarious tap dancer.

From the synopsis, it certainly sounds everyone will have a set of challenges to face in the New Year. But whose challenge will be the most difficult? Perhaps the newest preview video for the premiere can answer that question.

In the video, things look even more complicated than they did in the synopsis. Daphne doesn’t seem to be taking to probation very well (not that anyone could blame her). She has a moment of walking and talking with Emmett where she looks happy, but she also tells him that she feels like everything they had “just vanished.” Could this mean that Daphne is having feelings for Emmett? It could suggest that, but Daphne is also seen smiling at a new student, so maybe her heart is going in a different direction. Let’s just hope this new guys doesn’t get her into as much trouble as Jace did last season.

Also in the video, Kathryn is seen telling Toby that he can come home if he needs to. Whoa, does that mean that there’s trouble in paradise already between newlyweds Toby and Nikki? They had some rough times leading up to the wedding so it wouldn’t exactly be a shocker, but it does make one wonder if they truly belong together at this point.

There are also a couple of hookups in the preview. The first is really brief, but Regina and Angelo are definitely seen kissing. What does that mean for their relationship? Time will tell.

Switched at Birth recap: There are always consequences >>

As for Bay, in the video she says that she’s not going to let people decide what she gets to do and then she’s seen kissing Emmett. There were definite sparks between them at the end of last season, but with Ty’s lies out there, it could be just a matter of time before she finds out the truth and realizes she only went to Emmett because she was hurt. If that happens, poor Emmett could end up with his heart broken again, which would be awful.

What do you think now that you’ve seen the synopsis and new promo video for Switched at Birth Season 3?