We caught up with petite powerhouse Tracy Anderson at her New York City apartment to chat about her TV gig, fitness fads like juicing and, yes, Gwynnie.

Related story Gwyneth Paltrow Says Her Kids Had the 'Craziest' Sex-Ed Talk In 6th Grade: 'It Was Incredible'

Flip through any fitness or fashion magazine nowadays and you’ll likely come across celebrity trainer Tracy Anderson’s name more than a time or two. Whether she’s being thanked for changing someone’s shape or kicking their butt, the message is the same: Anderson gets results.

And, as a result, she counts some of the hottest bodies in the entertainment industry as clients — think Madonna, Courteney Cox, Ashley Greene, Shakira, Jake and Maggie Gyllenhaal and Jennifer Lopez.

What she doesn’t count, however, is calories. In an industry where fitness fads and crash diets proliferate faster than they can even catch on, Anderson has built a loyal following for defining and doggedly adhering to a regimen built on good ol’ fashioned hard work.

On client and bestie Gwyneth Paltrow 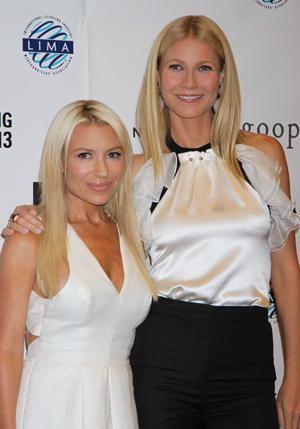 One client in particular who has been particularly open about her respect for Anderson’s method is actress and GOOP founder Gwyneth Paltrow, who credits Anderson with helping her get rid of her “long butt” and “batwings” (we so know what she is talking about, and sign us up, please!).

Clearly, the respect is mutual. In addition to calling Paltrow “amazing” and “surprisingly down-to-earth,” Anderson gushes about Gwynnie’s work ethic. “She doesn’t expect any quick fixes or miracles, and she respects me as an expert,” she says, going on to give her famous friend credit for her gusto.

“I like to train Gwyneth, not because she’s Gwyneth, but because she shows up,” Anderson asserts. “Like, she shows up and she brings it.” Paltrow recognizes, says Anderson, that if she wants to get the most from a workout , she’s got to go all in.

Not to mention, Anderson says, Paltrow gives great beauty advice… albeit, at times, unsolicited. “Sometimes she’s too honest with me about my hair and makeup,” jokes Anderson. “That would be the only thing I would criticize her on. She’s like, ‘Really? That hair color’s all wrong.’ And she’s usually right, so I appreciate her honesty.”

On their co-hosting gig

Now, in addition to sweating it out at Anderson’s studio, the fit-minded friends are teaming up outside of the gym on a 10-episode documentary series called The Restart Project. Produced by Ryan Seacrest Productions, the series follows the celebrity duo as they spend time with women who’ve triumphed over hardship and adversity through natural healing.

The women, Anderson says, have suffered everything from battling cancer to coming back from a near-death experience. Or, in a case that really resonated with Anderson, losing a child.

“I think when you’re given circumstances like that, I mean, you have a choice and you can go a lot of different ways,” Anderson says, “and her story is pretty powerful.” It is through the story of these “achievers” that Anderson and her pal Paltrow hope to inspire the everyday woman to exercise and make healthy choices.

“You know, we talk about balance all the time,” Anderson states. “Your mental clarity, physical health, self esteem — all of the things that make you your best version of yourself in terms of being an achiever — that’s all connected to your physical self.” She continues, “To say that you can’t figure out how to show up for yourself, you know, four to six days a week is a tough thing for me to deal with [with] people.”

That’s not the only fitness cop-out Anderson can’t stand though.

When we ask the health guru for her thoughts on the current juice cleanse craze, we can tell we’ve struck a nerve. “Gosh, how much time do we have?” she laughs. “I have a lot of issues with juice cleanses… “

So, what does she encourage women to do instead of trying “gimmicks” like juice fasts?

“I’m a forward-thinker in my field and I’m also incredibly research-based,” she says, “so the fact is we’re all different in terms of food.” What works for one person, she explains, may not work for another.

For Anderson, eating some of the healthy food recommended by fitness mags — things like avocados, coconut water and cranberries — would actually cause her to gain weight as she has allergies to all of those items.

Ultimately, she wishes everyone would “chill out” about food. “If you ask most men — that are, you know, into women at least — it’s like, they just don’t find [super-thin] attractive,” she observes. “It’s, like, proportion is one thing, but being crazy-emaciated thin — that’s not the picture of sex.”

Although, she admits, maintaining that balance can be difficult.

While she and her first husband seem to have struck the balance of friendship and co-parenting their now 15-year-old son after divorce, Anderson admits of her very recent separation to her second husband, “I make mistakes too, and I didn’t take a long enough time to get to know this one,” she laughs. “In a nutshell.”

Happily, the fitness guru to the stars has plenty of things in the works to keep her from dwelling on the negative.

“In 2014, I’m taking a much deeper dive into the step before fitness,” she offers, “and I’m kind of helping people, you know, kind of go through the issues of what keeps them from being their best selves.”

Plus, in addition to The Restart Project, Anderson will be tackling a show about weight loss and love, “because it goes hand in hand.” But she stresses her first and foremost priority will always be helping people.

“My focus is and always will be on how do I — faster, smarter, better — get people their best bodies?” she says. “And there’s a lot to come this year for that — a lot of great content, more DVDs, more gyms and more research development.”

Most importantly, she says, she wants to help people discover their inner strength.

“I think that before people can really take advantage of the fitness method that I’ve created, which is to empower every woman to be their best self, they have to start to look inside.”