Aaron Paul married the love of his life this year, so he decided to help out another man propose to his dream girl. Watch the video! 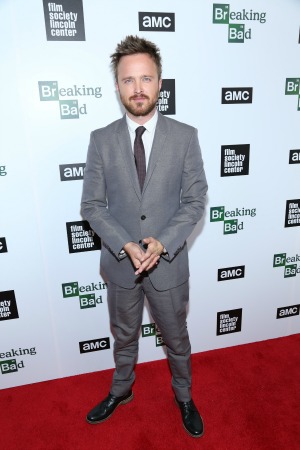 Aaron Paul knows a thing or two about love after marrying his “pretty bird” Lauren Parsekian over Memorial Day weekend this year. So it’s no surprise that the Breaking Bad actor was happy to help out a man with his wedding proposal.

On Sunday, Jason Lord proposed to Jackie Prater, his girlfriend of three years. While this might sound like an ordinary proposal, Lord did it in an extraordinary way.

Aaron Paul marries Lauren Parsekian: Who is his “pretty bird”? >>

He started out by singing the 1991 song “To Be With You” by Mr. Big with a few of his pals. According to the proposal video posted on YouTube, “the song has been an inside joke for them” after one of their dates involved “drunkenly dueting” to the catchy tune.

If the serenade wasn’t enough to woo his bride-to-be, he also got Jackie’s favorite actor involved in the big day. Lord had donated to Parsekian’s charity the Kind Campaign, which earned him a personalized video from the 34-year-old actor.

On the video, Paul said, “Hi Jackie, I’m Aaron… I just wanted to send you a message on behalf of my good friend Jason — I think you know him — who I understand has a very important question to ask you.”

Aaron Paul revs up in Need for Speed trailer >>

The proposal went down without a hitch and Prater said yes!

The AMC star had the final word, though.

He joked, “Ohhh, I hope you said yes. If you didn’t it would be pretty awkward for all involved. Good luck to you two. I couldn’t be happier for you.”

Watch Aaron Paul help out with the wedding proposal.