The Rolling Stones rocker Ronnie Wood is very happy with his new wife Sally Humphreys, although the pair occasionally find themselves in awkward situations — such as when she is mistaken for his daughter. 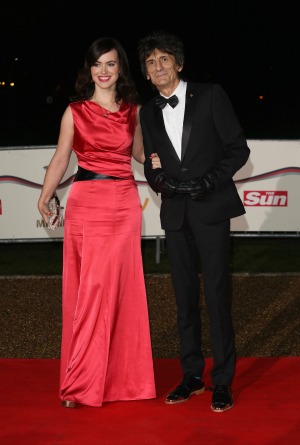 Ronnie Wood is celebrated as one of the greatest musicians around and a key member of the legendary English rock band The Rolling Stones.

However, that doesn’t mean Wood does not encounter some awkward situations from time to time. The rocker has now opened up about how people mistake his wife for his daughter.

The 66-year-old musician tied the knot to his beautiful 35-year-old wife Sally Humphreys on Dec. 21, 2012, and the couple have been enjoying a very happy marriage thus far. Although, the age difference between them does tend to get in the way once in awhile.

Speaking to the latest issue of Hello! magazine, Wood recalled how occasionally his theater producer wife, who is more than 30 years his junior, gets mistaken for his daughter.

“We were getting off an aeroplane just recently and someone said loudly, ‘Oh, my God, it’s Keith Richards.’ Then to make it worse, they asked ‘Are you his daughter?’ I was thinking ‘Please just stop talking.'”

Humphreys is not bothered with the age gap between her and her man though, and she added, “But the fact is, there is an age gap, so it isn’t unreasonable for someone to think that.”

“It seems to bother other people more than it bothers us and then you have to remember you don’t know those people because the people who do know us don’t flinch about it.”

However, just because the age gap doesn’t bother the brunette beauty does not mean she doesn’t wish her guitarist husband was a little younger.

Humphreys said, “Do I wish Ronnie was younger? Yes, but only from the point of view that you can’t go on forever, so it’s about the amount of time we’ll have together.”

“But it is what it is and honestly, maybe it’s the old-soul-young-soul thing, but we don’t notice it.”