Rihanna and Eminem are at it again. Do we like the results? Yes. Yes, we do. 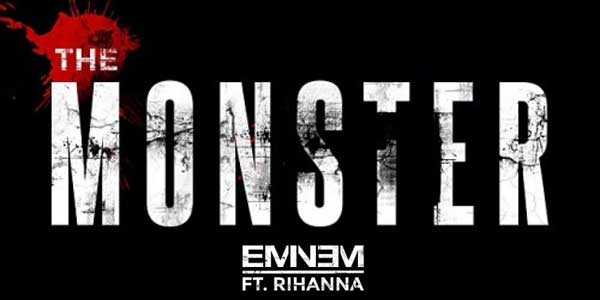 Eminem just released the video for his latest hit with Rihanna, “The Monster,” and it’s an absolute masterpiece. It’s been a rocky road for Eminem and it seems like things have finally turned around. He has another hit record, seems happy and appears to be clean. So what better way to continue this healthy new approach to life than by reminiscing? That’s exactly what Eminem does throughout “The Monster.”

Review: Eminem is back with “Symphony in H” >>

We start with Em on a couch in the office of his therapist, Dr. Rihanna. She quickly sends him on a trip down memory lane with a video full of clips from his past. There are scenes with Dr. Dre and Elton John, both past and present. We also make visits to 8 Mile, where Eminem grew up, and spend time with Eminem in a straitjacket.

Then we witness Eminem’s confrontation with his drug abuse and issues with the paparazzi. The entire journey through his past is interspersed with images of Em in an elevator and falling through the sky. When his journey stops, he finds himself in front of a cage guarded by two armed guards. Inside the case appears to be the craziest, nastiest version of Eminem and when the video ends, he walks away and leaves that part of him behind.

Is Eminem a rap god? Listen to the single and decide for yourself >>

Rihanna plays her part perfectly. From the stern head shrinker to the sexy music video girl, Rihanna knows her role in the video: Eye candy. (Don’t get the wrong idea: In the actual song she’s definitely ear candy. Love that voice.) From her sleek, leather-trimmed black dress to the bustier reminiscent of the plate carriers worn by soldiers, Rihanna makes for some fierce competition over who is really the star of the video.

Of course, the answer is Eminem.

This isn’t a video you start in another tab while you work or spend time on Facebook. “The Monster” is a video you’ll want to actually watch. If this is Eminem off drugs and in a decent place with life, then we’re absolutely OK with the positive changes. He has not lost his style, rhythm or captivating presence. And, while this may be his fourth time working with RiRi, we’re not sick of the duo yet. We hope the future brings many more collaborations between these two knock-out performers.