Jamie Dornan is currently filming the film adaptation of Fifty Shades of Grey, but his home life is all about family. His wife Amelia welcomed their first baby. 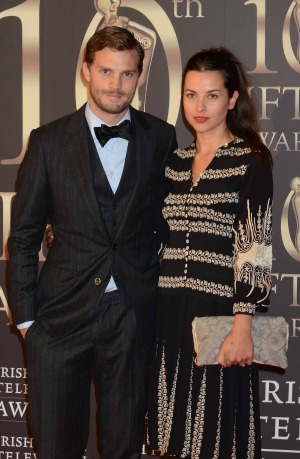 Jamie Dornan may be playing the object of every Fifty Shades of Grey fan’s affection, but for now, he is playing a new role. Dornan and his wife have reportedly welcomed their first child, according to Us Weekly.

Dornan and his wife, Amelia Warner, were married in April. They confirmed back in June that they were expecting their first child, according to MTV.

The new family is planning to spend the holidays in Vancouver where Fifty Shades of Grey is being filmed. The Dornans have not yet commented on the new addition to their family, and no other information, including gender, has been released.

The Irish actor previously appeared in shows Once Upon a Time and The Fall, but scored the role of a lifetime earlier this fall when he was selected to replace Charlie Hunnam as Christian Grey in the film adaptation of the bestselling book by E.L. James.

Hunnam dropped out, reportedly because of scheduling conflicts, and Dornan was brought in for the risqué role.

“I’m a fairly worldly guy,” Dornan told Entertainment Weekly after winning the role. “I grew up in a very liberal place. I’m not saying we had a playroom, but I’m not shocked by [the sex in the book]. It’s essential to tell the story. I can’t believe films that don’t invoke the sexual side of it. So it works for me.”

Dornan has obviously been in baby mode the last few months, and tweeted about the Royal Baby when he was born.

Dornan is filming Fifty Shades of Grey alongside Dakota Johnson, who is playing Anastasia Steele in the film. Filming began in December, and the cast has been filled out in the last few months with the additions of Rita Ora, Dylan Neal, Jennifer Ehle, Marcia Gay Harden, Eloise Mumford, Victor Rasuk, Max Martini Callum and others.