They’re baaack! Channing Tatum and Jonah Hill are set to bring some action and a few laughs for the sequel to 21 Jump Street. 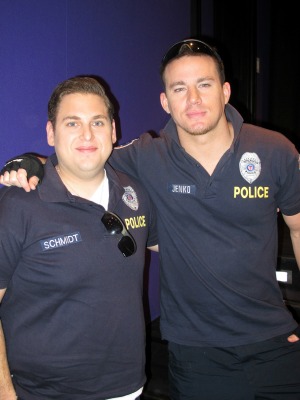 After becoming a box office hit in 2012 and earning over $138 million worldwide, Channing Tatum and Jonah Hill are back with the sequel to 21 Jump Street. On Monday, the trailer for the follow-up film, 22 Jump Street, updates fans on what Jenko (Tatum) and Schmidt (Hill) are up to these days.

The clip starts out with the two characters being summoned into Deputy Chief Hardy’s (Nick Offerman) office. He cuts the officers no slack and lets them know, “Ladies, nobody gave a s**t about the Jump Street reboot, but you got lucky.”

Since the wacky duo did such a great job the first time around, the department is now investing money into their division. However, Jenko and Schmidt will be at a new address: 22 Jump Street.

It seems that their old Korean church space was bought back by its original owners, so they are moving across the street to an empty Catholic church. Their first assignment sends them to college to hunt down the campus drug dealer.

The two are faced with university hijinks like frat parties, co-ed bathrooms and a few rounds of beer. While Jenko seems to be enjoying the experience, it looks like Schmidt is reliving his college-hazing nightmare.

Watch the trailer for 22 Jump Street.