Jessica Simpson has had two babies in the last two years, but is already back to her pre-pregnancy weight. So how did she do it? 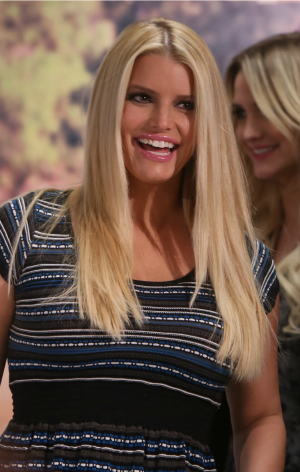 Jessica Simpson has had two babies in less than two years, but is already back to her pre-pregnancy weight. The singer credits Weight Watchers, but admitted the children themselves also have a lot to do with it.

“With both kids I’m running up and down my stairs a million times,” Simpson told USA Today. “Kids can keep your metabolism going.”

Simpson and fiancé Eric Johnson had daughter Maxwell on May 1, 2012 and son Ace on June 30, 2013. Having a 1-year-old and an infant at home can help you get quite the workout. But football player Johnson’s active lifestyle has also helped Simpson get back into shape.

“Eric and I go on walks together,” she said. “I try and walk about four miles a day consistently. It makes me feel better.”

Simpson had signed on with Weight Watchers to lose her baby weight after Maxwell. But when she became pregnant again very soon after giving birth, many wondered what would happen to her deal with the company.

She is again religiously sticking to the program, and said after Maxwell she lost more than 50 pounds, according to People. Soon after Ace was born, her doctor gave her permission to jump right back into the diet again.

PHOTO: Jessica Simpson steps back into the spotlight >>

Simpson has created her very own family, and said she wouldn’t change anything about the roller-coaster ride she’s been on the past few years.

“Every day we don’t know what’s going to happen,” she said. “They definitely keep our lives busy but full of smiles. We laugh a lot.”

The singer is being a mom and losing weight all in front of critics and fans, but she told USA Today all she wants is “to be the best version of myself. I want to be a great mom and a great example to my kids.”

Now that both children have been born, Simpson and Johnson are back to planning their wedding. The couple has been engaged since 2010, so it’s possible they could wait a few more years before saying their I do’s. And Simpson hinted there could be more babies in their future.