It was a happy day for Emily Blunt as she was feted by a few famous friends at her home in Los Angeles. Is she having a boy or girl? 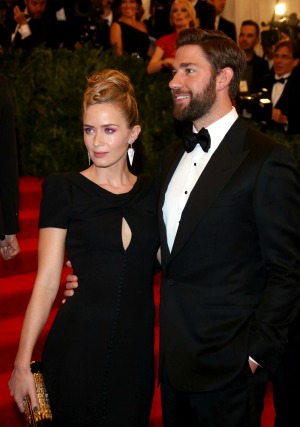 Another Hollywood celebrity is getting ready for the arrival of their bundle of joy. On Saturday, Emily Blunt celebrated her baby shower with a few celebrity friends.

According to Us Weekly, some pretty famous faces attended the afternoon event, including Amy Adams, Kristen Bell and Jennifer Aniston. Aniston was reportedly dropped off at the party by her fiancé Justin Theroux.

Kendra Wilkinson is gearing up for her mini-me >>

A source told the entertainment site that it was a mellow day, “very small and intimate.” In total, about 15 guests attended the shower.

For anyone trying to guess whether Blunt and her husband John Krasinski are having a boy or girl, there were pink balloons decorating the actress’ Hollywood Hills home. That might be a pretty good clue, but some guests kept their gifts gender-neutral.

The source continued, “A few guests brought presents with both pink and blue gift wrap. One guest had a bag with baby clothes and a plush stuffed animal.”

The 30-year-old Devil Wears Prada actress married Krasinski in 2010 at a star-studded wedding in Como, Italy. They began dating in 2008 and became engaged a year later.

The duo announced their pregnancy back in September. This will be the first child for the couple who have always expressed their love for children.

The British actress told Manhattan magazine in 2012, “We want to have children; I just don’t know when yet. I’m just not sure about the timing of all of that. We’re both from big families, so I think it’s something we want.”

The mom-to-be hasn’t revealed her due date, but it’s clearly a happy time for Blunt and Krasinski.