American Hustle takes us back to the disco era. In this exclusive clip, Christian Bale and Amy Adams window shop while steaming up the screen. 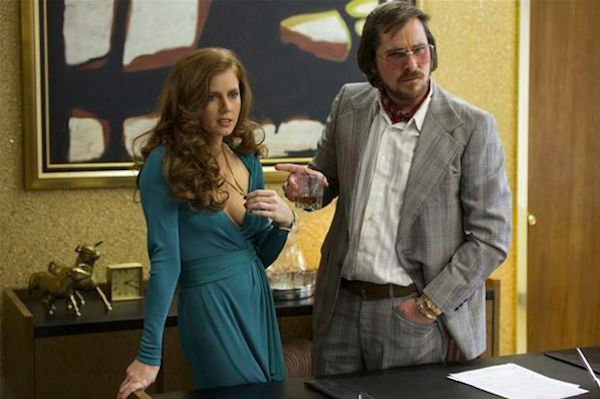 American Hustle is a period piece that takes place in the 1970s. It’s all about living the American Dream by any means necessary. The story centers on con man Irving Rosenfeld (Bale) and his partner Sydney Prosser (Adams). They’re strong-armed into working for an unpredictable FBI agent called Richie DiMaso, played by a permed-out Cooper.

Rosenfeld is roped into a world filled with power brokers and the Mafia, so this isn’t your average con. There’s also the presence of New Jersey politician Carmine Polito (Renner), who’s stuck between the FBI and members of the underworld.

Perhaps the most unpredictable piece of this crime puzzle is Rosenfeld’s wife Rosalyn (Lawrence). Her unstable nature could blow his best-laid plans sky-high. We think Rosalyn’s attitude may have something to do with her husband’s wandering eye.

In the following clip, Rosenfeld and Prosser share a tender moment while trying on coats. It starts off pretty innocently, but they eventually cross the line. American Hustle isn’t just about lies and manipulation. It’s the only film this holiday that features a real adult love story. Just look at Bale and Adams and watch the sparks fly.

Watch the clip below: