Miley Cyrus revealed that she was afraid of being alone, so she hung on to Liam Hemsworth for fear she wouldn’t be herself if she was without him. 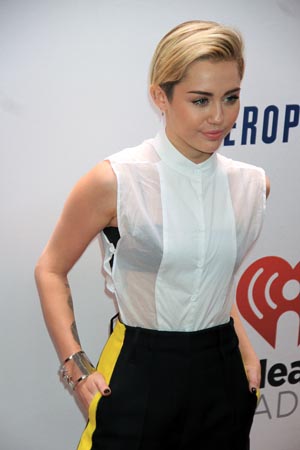 Miley Cyrus has opened up about her former relationship and broken engagement to Liam Hemsworth, revealing that she was scared to be alone because she was afraid she would lose herself if he left.

In an upcoming interview on Barbara Walters Presents: The 10 Most Fascinating People of 2013, Cyrus goes into some detail about her infamous engagement to her former fiancé, E! News reported. She revealed why she was with him for so long, even after it was evident that their romance was heading south quickly.

“I was so scared of ever being alone, and I think conquering that fear, this year, was actually bigger than any other transition that I had, this entire year,” Cyrus told Walters in the pre-aired segment. “I don’t ever want to have to need someone again, where you feel like without them, you can’t be yourself.”

The 21-year-old controversial singer also said that while she loved Hemsworth, she’s now in a better place and can actually feel happy. Cyrus also revealed that she does want to get married someday, but only “in the time that it needs to be.”

Apparently, she also realized that getting engaged so young was a mistake, although she enjoyed the perks that came along with it.

“I don’t think I realized what 19 truly is and I got engaged at 19, and definitely wouldn’t change being engaged,” Cyrus continued. “It was so fun wearing a fat rock for a few years.”

Meanwhile, Hemsworth can be happy himself knowing that he doesn’t have to deal with things like Cyrus flashing her boobs on a Twitter Christmas card. The 21-year-old pop star thought it would be a good idea to pose while pulling her shirt up, exposing her breasts, as she stuck her tongue out in an effort to wish her fans a Merry Christmas.

“Merry Christmas,” Cyrus posted on Twitter along with the photo. “THANK YOU NY for being one of the few states to @freethenipple.”

Well, Cyrus is certainly being herself now that she’s single! She actually looks like a happy puppy.