Amber Rose’s weight loss success is evident in a new side-by-side photo comparison between her heaviest during pregnancy and after hard work. 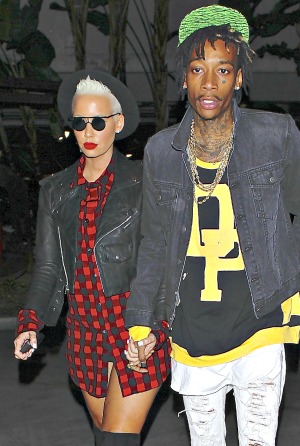 The first-time mom, who is seen here showing off some serious thigh alongside husband Wiz Khalifa while attending a Jay Z concert in Los Angeles on Dec. 9, had no small amount of weight to take off.

“I was 202 pounds when I had my son, but I’m tall, so it didn’t look like it,” Rose previously shared, giving the curious some idea of her weight fluctuation throughout pregnancy.

Just how tall is she, though? At 5 feet 8 inches, the model may be slightly taller than the average female, but by no means is a standout for her line of work.

Over the weekend Rose posted the pair of bespectacled images below, telling Instagram followers, “Before & After my baby boy Sebastian.”

5 Ways to ditch the baby weight without exercise >>

“It’s hard to get off baby weight,” the 30-year-old model admitted this past May. “It’s a different kind of weight because for nine months you stretch your stomach out and then it’s hard to get that back. I’m working on it. I lost like 30-some pounds already.”

Though she’s deservedly proud of her success, Rose has gone out of her way to try to keep it real.

“Most celebs give u false hope when u have a baby ( My son was 9lbs) and in 3 months ur supposed to be skinny again,” she tweeted in November. “It’s not realistic in most cases … don’t put ur life at risk for societies standards of when ur suppose to lose ur pregnancy weight. Take ur time & don’t take the easy way out.”

Do you find Amber Rose’s weight-loss photo flaunting to be inspiring?