Dylan Sprouse is the latest child star to face controversy when photos of him in the nude were leaked online. But at least he is owning up to it. 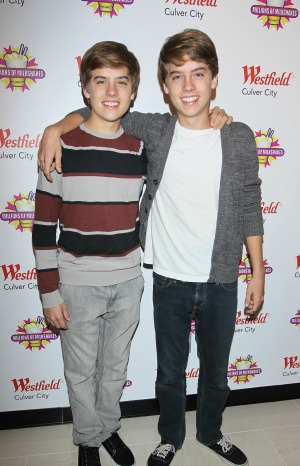 One of the Disney twins you may remember best as an adorable child is all grown up. Dylan Sprouse played Zack Martin, along with his twin brother, Cole, on Disney’s The Suite Life of Zack & Cody, as well as Suite Life on Deck. He is now 21 years old, and he has admitted nude photos that leaked online over the weekend are real.

Vanessa Hudgens: All grown up and doing things her way >>

The photos are in “various states of undress,” according to E! News, including a selfie with only him and his phone in front of a mirror.

Dylan didn’t deny that the photos are real, however.

While celebs never seem to learn about taking nude selfies, at least Dylan learned to own up to it and make a joke of it.

He commented on the photos that had been posted to Tumblr over the weekend, saying, “Thanks for making me laugh through all of this.”

He then went on Twitter to own up to the photos.

His brother Cole later joked about the photos.

Through it all, Dylan kept a humorous attitude about the whole thing.

Dylan recently made news when he refuted Joe Jonas’ claims that Disney stunted his creativity, and that the company wouldn’t let the Jonas Brothers choose the musical or creative direction of their own band.

“First, I think it’s (B.S.) that they were being robbed of choice or creativity. If they wanted to, they could have told Disney ‘no.’ Cole and I did this hundreds of times and we ended up all right,” Dylan told the Jonas Brothers singer. “The only reason they didn’t is because, like many of the people on that channel, I think they fell for the allure of fame.”

The Sprouse twins also appeared in the 1999 movie Big Daddy and as Ross’ son Ben on Friends. Dylan is now a student at New York University and is studying video game design.