Courteney Cox has been charming audiences for nearly three decades, a fact made more impressive by the lack of skeletons in her closet. We did some digging, though, and found a few things you might be surprised to learn about the Cougar Town star. 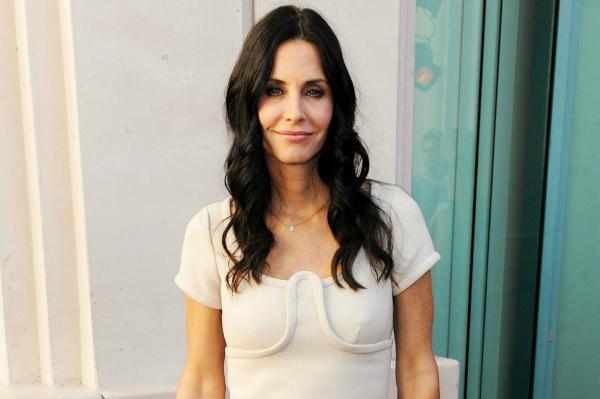 Ed Sheeran and Courteney Cox are such chums — who knew? — that the singer-songwriter introduced the actress to her new boyfriend, Johnny McDaid. A member of the band Snow Patrol, McDaid shared a pad with Sheeran for a year before Sheeran hooked him up with Cox. “I wasn’t allowed to talk about this, actually, but it’s just gone public,” Sheeran spilled to omg! “My housemate, who I’ve lived with for a year, I introduced him to Courteney Cox. They started dating and are crazy about each other…”

She was almost Rachel

To the millions of viewers who tuned into the hit show Friends for 10 seasons, it might seem unimaginable to have anyone other than Jennifer Aniston play the part of Rachel. But the part originally belonged to her real-life bestie, Courteney Cox. It was only after Cox auditioned for and won the role that she asked to be recast as Monica, feeling more of a connection to her love of cooking and need for order.

She (and Tampax) broke a taboo

The year was 1984. The ad was for Tampax. And the spokesperson was Cox. “I’m the first girl to say the word ‘period’ on television,” the actress revealed to Matt Lauer during an interview on Dateline NBC. In addition to “making advertising history,” in Lauer’s words, the commercial proved beneficial to Cox’s budding career — the job offers began rolling in soon after.

She got shortchanged in the Emmy department

If you’ve ever watched Friends, you undoubtedly recognize the comic brilliance that is Monica Geller. Sadly, Cox’s character was egregiously overlooked in the Emmys department. “The only time I was like, ‘Whoa!’ was [in 2001, when Lisa Kudrow and Jennifer Aniston] were both nominated and not me,” she admitted to TVLine. “That’s when it’s like, ‘I have a lesson to learn here.'” Cox ended up being the only regular cast member never to receive an Emmy nod for the show.

It’s pretty obvious Cox is one tough lady. But, seriously, don’t mess with her — she’ll take you out in a swift blur of brown belt glory. Reportedly, the petite brunette beauty took up karate after daughter Coco was born so she could defend her family in any situation. According to Bleacher Report, Cox has gotten both Arquette and Aniston hooked on Budokon, a form of martial arts that translates as “the way of the spiritual warrior.”

She’s got a serious problem with premature refilling

So, if you don’t want to incur the karate wrath of Cox, maybe don’t try to refill her half-full glass of iced tea. A waiter at Beverly Hills’ The Polo Lounge tried to do exactly that while Cox sat for an interview with USA Today during lunch, and the star lightheartedly unloaded. “That’s one of my pet peeves in life: you get it so perfect and they come and want to add more! The amount of sugar I have in there now, it’s so perfect!”

The world has her to thank for “the Carlton” dance

Former Fresh Prince of Bel-Air actor Alfonso Ribeiro, who made the dorky “Carlton” dance famous on the show, broke to BuzzFeed that he was inspired by Cox’s moves in Bruce Springsteen’s “Dancing in the Dark” video, along with Eddie Murphy’s “white man” dance. “What I did was ultimately take those two dances and combined them and made it my own, and made it my character’s,” Ribeiro explained.

She struggled with infertility for years

Before having daughter Coco, Cox and then-husband David Arquette tried unsuccessfully to have a child for nearly a decade. Cox reportedly suffered eight miscarriages — all while working on Friends. “That was hard,” she told Matt Lauer. “Sometimes, like I remember one time I just had a miscarriage and Rachel was giving birth. It was like that same time. Oh my God, it was terrible having to be funny.”

She believes attraction is about more than sex

When it comes to love, Courteney Cox isn’t looking for a relationship that has no spark outside of the bedroom. “I have to be physically attracted to someone,” the star said. “But I can’t just be with someone just because it’s great sex. Because orgasms don’t last long enough.” Some might say this explains a lot in regards to her relationship with her ex-husband.

Despite his occasional mortifying admissions about their sex life, Cox wouldn’t erase her nearly 14-year marriage to Arquette. “I think it’s important, no matter what the outcome is, when you take these risks [in a marriage] and are willing to get real and get messy,” she told Harper’s Bazaar. “I think you can only become stronger people, whether it’s together or apart. In the end, everything will be better.”