You might not be able to tell from the show’s title, but Cougar Town is chock full of practical knowledge applicable to nearly everyone. As such, we’ve culled 10 of our favorite profundities courtesy of the cul-de-sac crew. 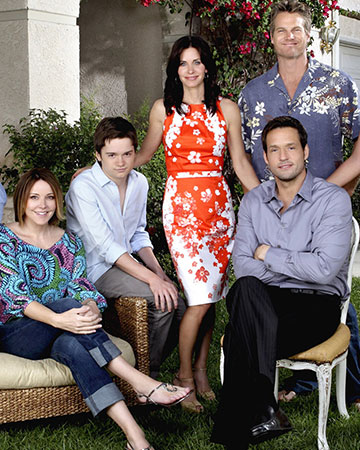 Love and hate both have a boomerang effect.

Take it from Jules and the rest of the gang — if you put love out into the world, it’ll come back to you. Be it a kind word or a loving gesture, that good karma will find its way full circle. But beware… the same thing happens when you send out bad juju.

We mean this in the most literal sense, because friends can clearly get away with stuff you’d never let a stranger pull. I mean, really, Ellie calls Laurie “Mongo.” On the flip side though, no one will be your champion, your biggest fan and your defender like your besties.

Sex with an ex? Not such a bright idea.

Sure, hopping in the sack with your ex might seem like a viable — even attractive — option when you’re feeling lonely. And you’ll probably justify it with the logic that it’s better than adding another notch to your un-chastity belt. Truth be told, though (in ballad form by Grayson, no less), the joy of sex with an ex is usually fleeting while the consequences tend to linger.

When in doubt, break out the truth gun.

Feel like your BFF isn’t being totally honest? Can’t stand the uneasy silence after asking a question with a potentially awkward answer? Get things back on track by slinging your “truth guns” from their imaginary holsters on your hips. If nothing else, they’ll render all involved blissfully forgetful of any tension.

Some things are better left unsaid.

While we admire Jules’ devotion to looking out for her son’s best interests, this moment truly illustrates why some things are better left unsaid — or to clandestine, embarrassment-free sources of knowledge like the Internet. Plus, she mortified him and betrayed his trust. Bad Jules!

You can’t bring emotions to the surface without them breaching a little bit.

Jules and Ellie are clearly capitalizing on Andy and Bobby’s repressed feelings of inadequacy in regards to their sons, and we all see how that works out for the guys. There’s something we can all learn from that: Don’t toy with your emotions — once you bring them up, they’ve got to go somewhere. And most of the time, that outlet is your ocular orbits, in the form of a messy sobfest of overwrought sentiment.

Everyone needs a happy place

Kirsten’s intentions might have been honorable, but alerting Bobby to all of the sadness in the world took the typically unflappable boathouse dweller to a dark place. For Pete’s sake, it even messed up his golf game. To help him drown out the steady stream of depressing thoughts overwhelming him, though, the couple finds his ideal white noise — the sound of cracking open a sudsy brew. Bottom line? Whether it’s the crackle of foam in a glass or something else, we all need to find a white noise that helps us unwind.

Think before you ink.

This seems to be pretty obvious advice, but have you seen the number of humiliating tattoo mistake pics circulating online? C’mon, people! We’re not suggestion you hire a copy editor before you hit the tattoo parlor (although it’s not a bad idea), but at least have someone with a clue look it over before gun meets skin in a forever kind of way — lest you end up with the Chinese symbol for food… for life.

There actually are some bad ideas.

Whoever sold you that line about “there are no bad ideas” probably isn’t prone to having good ones. They’re probably the type to pitch ideas like Laurie’s talking threat cakes. Although, we have to admit, they might not be marketable commercially but we can think of a few people we’d happily send one to.

Everyone needs a hobby, right? Hobbies bring people together… as Laurie points out, some of the Purple Tooth Crew’s best memories were made over wine. It doesn’t matter if you drink it from a Big Joe, Big Carl, Big Lou, Big Kimo, Big Tippi or, heck, even a Little Richard, wine is fine anytime. Disclaimer: unless you’re legitimately an alcoholic, of course, in which case there’s never a good time for wine.