Terminator: Genesis is moving full speed ahead. Earlier this week, Jason Clarke was cast as John Connor, and Friday, they found the perfect actress to play his mother. 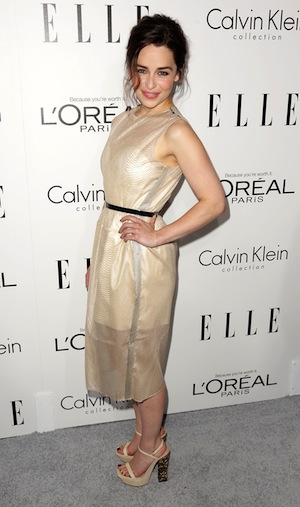 The Terminator franchise is getting a makeover. After weeks of speculation, a major casting decision has finally been confirmed. The folks behind the upcoming reboot have found their Sarah Connor.

According to Deadline, Game of Thrones star Emilia Clarke will play the iconic role. She’s already a mother of dragons on TV, so why not of the futuristic Messiah in film? She’s currently in contract negotiations after beating out Brie Larson for the role.

Clarke will join Arnold Schwarzenegger, who’ll return as the title character. Prior to Clarke’s announcement, it was revealed that Australian actor Jason Clarke was in talks to play her son, John. He’s recently made a name for himself in films like Zero Dark Thirty and The Great Gatsby. Next year, he’ll headline the sequel Dawn of the Planet of the Apes.

Not much is known about the script for Terminator: Genesis, but it’s fair to say that the movie is another origin story. John Connor’s appearance as an adult could be part of a time-travel scenario. It’s a plot device the Terminator films are famous for.

There’s still one crucial role that’s yet to be cast: Kyle Reese. He’s John’s father, who was played by Michael Biehn in the original film. Variety reports that Garrett Hedlund, Nicholas Hoult and Boyd Holbrook are all being looked at for the part.

What do you think of Emilia Clarke as the new Sarah Connor?