James Franco isn’t afraid to poke fun at himself. This week, he shows off his sensual side as the author of the fictional Fifty Shades of Gary. 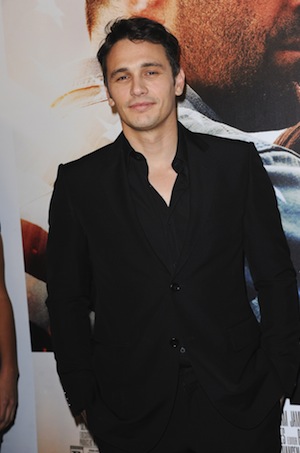 James Franco has done it again. The actor, writer, producer and scholar knows his way around the internet. If it’s not jaw-dropping Instagram photos, it’s hilarious spoofs like “Bound 3.” This time, Franco plays a supporting role in a book trailer for Gary Shteyngart’s new memoir, Little Failure.

In the video, Franco stars as Shteyngart’s talented, younger and better-looking husband. The author feels down-and-out because his publisher described him as a failure. How can Franco cheer him up? He doesn’t. Instead, he reveals that he has his own book coming out.

Unfortunately, Franco decides to release his book around the same time as Shteyngart.

Apparently, the world eats it up. Shteyngart heads to a local coffee shop, where he runs into a barista played by Alex Karpovsky (HBO’s Girls) — and guess what he’s reading? As a matter of fact, all of the customers are nose-deep in Franco’s latest work.

One patron exclaims, “Franco’s totally captured the zeitgeist,” while another gushes, “Oh, my God, it’s even more juicy on a tablet device.”

How can Shteyngart compete with that?