STARZ has released the official Black Sails trailer and some character previews in anticipation of the series premiere in January 2014. Get your first look now! 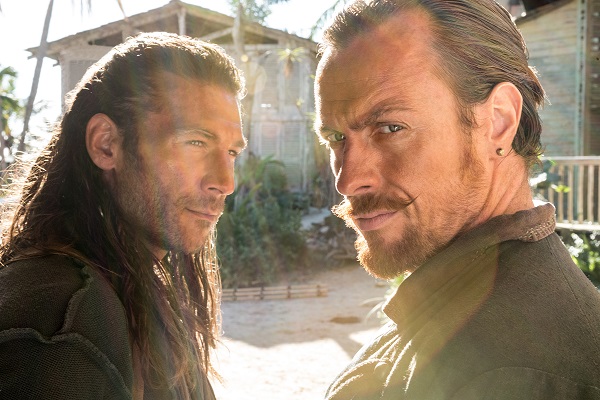 Shortly after San Diego Comic-Con last year, we brought you word of the upcoming STARZ series Black Sails. As one of the series stars put it, there’s only one thing better than sex, drugs and rock and roll, and that’s sex, drugs, rock and roll and pirates.

STARZ has released their first official trailer as well as some introductory videos giving us an opportunity to get to know the major players in this nation of thieves. In 1715 in Nassau, Bahamas — 20 years before the tale of Treasure Island — John Silver was still learning the pirating ropes under the tutelage of Captain John Flint. That’s when Black Sails begins.

Captain Flint tells his crew that the most important element on the ship is trust — or it’s doomed. That sounds ominous. The series seems to promise us a lot of swashbuckling adventure, violence and sex — beautiful people and the attraction that occurs when all of the circumstances collide.

Michael Bay attacked on the set of Transformers 4 >>

Executive Producer Michael Bay is no stranger to lavish productions filled with intense action sequences — he’s been responsible for Armageddon, Pearl Harbor and all of the Transformers movies. A series about pirates seems like a logical stepping stone for him.

The captain of the Walrus, Flint is the most feared of all the pirates. He holds a lot of rage and has a propensity for violence. He’ll do whatever it takes to hold off the British and Spanish, including proclaiming himself the ruler of Nassau. His portrayer, Toby Stephens, is an accomplished stage and television actor in the United Kingdom.

Vane is considered to be the next great pirate captain and is known as much for his incredible financial success as for his vicious temper. Zach McGowan, who plays Vane, was working as a chef in prestigious Los Angeles restaurants while acting part time when he was cast in Showtime’s Shameless, which led him to Black Sails.

Once a sailor, opportunity and individuality put Silver into direct conflict with Captain Flint as they become reluctant partners in their quest to take the Treasure Fleet. Portrayer Luke Arnold is an up-and-coming star from Australia who won the Heath Ledger Scholarship. In 2014, he’ll be portraying singer Michael Hutchence in a TV miniseries titled Never Tear Us Apart: The Untold Story of INXS.

Eleanor’s father is the black marketeer for all the pirates, and he has put his daughter in charge of all of his dealings. She also owns and operates a tavern on the main street on Nassau. She makes a pact with Captain Flint that will either make her an independent woman or seal her to a doomed fate. Portrayer Hannah New has a limited résumé, but she will be seen with Angelina Jolie in Maleficent in 2014.

Angelina rules the night in the Maleficent trailer >>

Where would pirates be without prostitutes? Seductive, cunning Max finds a kindred spirit in gal pal (and lover) Eleanor, but their similar desires put Max into dangerous territory. Playing Max is Jessica Parker Kennedy, who also starred in 90210, Smallville and The Secret Circle.