Julia Roberts squashed the rumors that she’s pregnant with her fourth child, telling David Letterman there’s no chance of another baby for her. 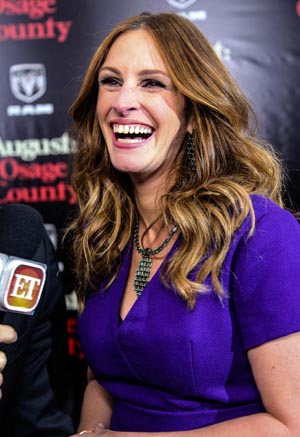 Kicking the baby bump rumors right out the door, Julia Roberts confirmed that she’s not pregnant with her fourth child when she stopped by the Late Show With David Letterman on Thursday, Dec. 12.

Roberts incited gossip when she was photographed in a baggy sweater with what appeared to be a swelled-up belly under it. However, the actress came clean to Letterman, assuring everyone she will not be having another baby.

Why Jennifer Lawrence may be too cool for Julia Roberts >>

“Have you thought about adding more to the group?” Letterman asked the 46-year-old actress, to which she jokingly replied, “Oh, sure.” Then, when the late-night talk-show host asked if there was “any chance,” she responded with a firm “No.”

The famous mother of three had also worn loose clothing on other occasions, including a tent dress (without shoes) at an awards show where she honored George Clooney last month. She also wore a baggy coat to the Letterman show New York Studios.

However, once inside the set, Roberts sported a black pantsuit that was a more fitting over her tummy area, suggesting she may not be carrying that bump after all.

Married since 2002, the actress and her husband Daniel Moder have 9-year-old twins, Hazel and Phinnaeus, and a 6-year-old boy named Henry.

The Pretty Woman star also chatted with Letterman about family life, telling him that her kids are awesome.

“[The children] are great!” she said. “Everything they do makes me happy.” And when asked about motherhood, she replied, “The world! Just the world.” But she also admitted to getting jealous of the kids’ homework and how it takes so much of their time away from her.

“God, I hate homework. I hated it when I had to do it and now I hated when they have to do it,” she quipped. “When they come home from school, I want them back.”