As expected, Billboard has announced its pick for artist of the year. 2013’s recipient has a hit album, multiple top-10 singles and a sold-out tour. 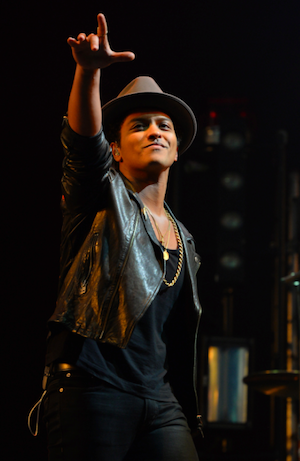 Mirror, mirror on the wall, who’s the biggest artist of them all? In 2013, that title belongs to Bruno Mars. Friday, Billboard revealed Mars as its first male act to receive the title since 2008.

The singer should be thrilled by this accomplishment. 2013 was filled with worthy competitors, including Kendrick Lamar, Robin Thicke, Justin Timberlake, plus Macklemore & Ryan Lewis. So how did he surpass that bunch?

It all started last year with the December release of Mars’ album Unorthodox Jukebox. It debuted at No. 2 but eventually hit the top spot during its 12th week on the charts. To date, it’s reached platinum status with over 1.8 million copies sold.

The Heartthrobs of iHeartRadio Music Festival 2013 >>

In terms of singles, Unorthodox Jukebox features three top-10 hits: “Locked Out of Heaven” (six weeks at No. 1), “When I Was Your Man” (No. 1 for a week) and “Treasure” (No. 5). We also can’t forget Mars’ Moonshine Jungle tour, which made it onto Billboard’s list of Top 25 Tours. It kicked off last June in Washington, D.C., and thus far has grossed $46.4 million.

Mars is currently on break after hitting 48 dates on the road, which included a two-night stay at the Staples Center in Los Angeles. He’s expected to return Feb. 28, when he heads down under to Australia and New Zealand. He also has plans for Asia and Mexico before starting another North American run.

Bruno Mars is a busy boy!

What do your think of Mars as Billboard’s artist of the year?