The South Pole is a little sexier today after Prince Harry completed his trek to raise funds for the Walking Wounded. 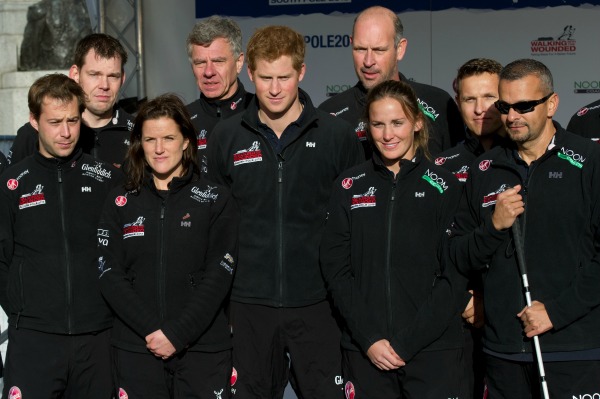 Our favorite frosty ginger ended his grueling 200-mile hike in high spirits after the organization decided to drop the competitive element of the walk.

Ed Parker, the expedition’s director and co-founder of Walking With The Wounded, said in an audio blog released to the press, “We always knew that this wasn’t going to be easy, but that is what makes the challenge so exciting. Our aim was to show that, despite injury, young men and women from our armed forces can still achieve great things.”

“We came down here, determined to get 12 men and women, all injured in conflict, to the South Pole, and this is what we have done. The feeling is incredible.”

Several days ago Harry recorded his own audio blog and explained how canceling the competitive side of the fundraiser brought all the former competitors together to enjoy the spirit of what they’re trying to accomplish, despite his team having taken an early lead.

“Everyone is in really high spirits. The race obviously got cancelled a couple of days ago — a really good thing that has happened,” the royal said. “It is nice to see everybody intermingling with each other, not only every night because we camp together, but also during the day.”

“Everyone just can’t wait to get to the end. I think mixed emotions probably, I think some people, for instance Duncan [Slater, injured soldier], double amputee, simply doesn’t find walking to the South Pole a big enough challenge, which is why he really enjoyed the race.”

“I think everyone back home will appreciate the fact that just being able to walk 100km [62 miles] in these conditions with no legs is a pretty amazing feat in itself.”