Beyoncé and Jay Z have teamed up again for a new song and this time it leaves no doubt they are grown and sexy. Their vivid details are definitely sweat-inducing on this track, which comes on the heels of Beyoncé debuting an album no one saw coming. 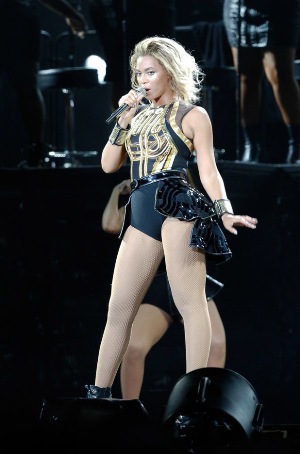 Beyoncé is out for blood. She is the queen — and you can never forget it.

Rumor mills are swirling that her distaste with the music industry had prompted her secretive debut album.

Get more insight on the album here >>

According to some sources, Mrs. Carter isn’t too pleased with the rushed nature of singles in the music world or the fact that albums no longer sell like they used to. So, she copes by releasing an album no one saw coming. And what’s even riskier, she does it around the most wonderful expensive time of the year.

But let’s be honest — if anyone can pull off a stunt like this and profit from it amidst the chaos, it would be her.

The song that has everyone riled up is her ferociously sexy “Drunk in Love.” It’s a heart-racing and thrilling looking glass into the passionate love between Beyoncé and her husband Jay Z.

While fans can’t quite agree whether this is really about being drunk or just consumed entirely by love, I can say with conviction this may be the best song Beyoncé has put out in the past couple of years. She raps, she sings and Jay Z comes in and raises the caliber like he always does.

First, there was “’03 Bonnie and Clyde.” Then “Crazy in Love.” “Drunk in Love” must be the “we got married, had a baby, but we still got it” hit that completes the trilogy. So for all you naysayers who claim passion ends once you say “I do,” check out the presidential couple of hip-hop and R&B’s example.

Want to know how successful this couple is? Check out their financials here >>

Want to know what other songs are trending? Stay up to date on music news by signing up for our newsletter >>

Not that Beyoncé needs any help. Ever.

I’m not a bandwagon fan, but Beyoncé’s latest single deserves every ounce of praise. She continues to reinvent herself, and while she’s busy being a wife and a mother, she made sure everyone knows she still “got” it.