The test on tonight’s episode of The Vampire Diaries: Can Damon save Elena? It’s a pop quiz that ends with an answer that isn’t so black and white. 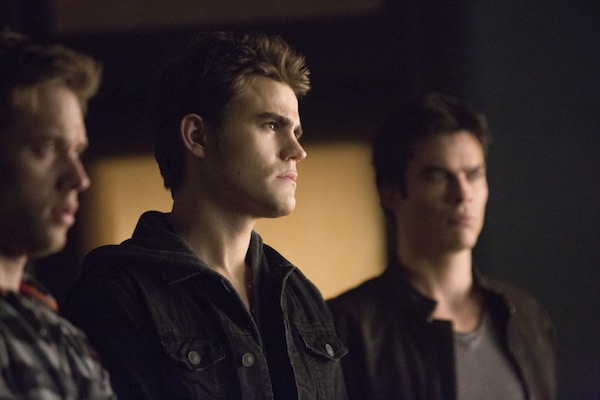 The midseason finale of The Vampire Diaries was so snarky, we wish vampires really existed only so we could use such witty lines. (Since we can’t, because life just isn’t fair, we’ve included some of the best quotes below.) The theme for the night was pop quiz with Damon (Ian Somerhalder) as the ever-so-clever student. Will he ever learn? Tonight is the night! If only that didn’t come with a whole can of complications.

Aside from the brilliant writing of tonight’s episode, the story was action-packed and tense, full of the twists and turns the show is known for. Just like we like our midseason finales.

“Our hot naked bodies collided in one unforgettable night of passion.”

Damon manages to escape his cell only to discover Katherine (Nina Dobrev) hanging around his house. Being true to herself in all her glory, she spills the dirty deets on her night with Stefan (Paul Wesley), which leads to the above quote. What she fails to mention is that her hair is going gray and starting to fall out because she’s dying. Damon responds to Katherine’s sexy talk by saying he feels like he’s going to barf.

If Damon thinks listening to Katherine’s sexy story is torture, he should put himself in Elena’s (Nina Dobrev) shoes. She’s the one strapped to a table in Wes’ lab, after all. At least Wes gives her some vervain anesthesia before he starts experimenting on her.

Damon explains the dirty details of the Augustine Society to Stefan, and the two run off to track down Aaron. Once they find him, Damon gives Aaron a good old pop quiz:

So your girlfriend is kidnapped by a mad scientist. Do you:

A. Get a new girlfriend

B. Call the police

C. Kill someone close to that mad scientist

Aaron guesses correctly and decides it’s time for him to run. Where he fails the test is in not realizing Stefan would be standing right behind him to block his path.

Continuing with the lesson plan for the day, Damon briefly takes on the role of teacher when Aaron asks him why Damon isn’t dead. Damon explains that Aaron aimed for the head when he shot him, not the heart. Damon is sure to stress that next time Aaron should always aim for the heart, leading to the quote above.

“Or he’s in front of me, imagining what my kidney tastes like.”

Aaron acts as Damon and Stefan’s leverage to get Elena back and calls Wes, where he says the above quote. Unfortunately, Wes isn’t that great of a guardian. He’s willing to sacrifice Aaron for the sake of his studies.

Wes isn’t going to let the brothers stomp all over his research, though. He releases Enzo to kill Damon.

Enter Enzo with his navy henley, jeans and slicked back hair looking oh-so dapper. That’s enough to make us swoon but add the accent and we really hope he sticks around for a few more episodes. Or they could make him a series regular. We’re just saying! *Cough* Caroline does, after all, need a new love interest. Just an idea!

Anyway, Enzo and Damon scuffle, Damon wins and refuses to kill Enzo. Instead, he saves Enzo from Dr. Wes and says he and Enzo are even. Enzo isn’t so convinced. He thinks Damon will always be a monster.

Turns out, Damon agrees. And, as a result, decides to end things with Elena once he saves her. She, obviously, objects and says she loves and accepts Damon for who he is. Cue above quote from Damon. He doesn’t want to pull her down with him so he’s letting her go. This is the part where our jaws drop and our eyes start to water.

So here’s the thing, Damon passes his test with flying colors. He saves Elena just before Wes can make her a vampire that craves vampire blood. Damon becomes the hero of the day, but also realizes his way of doing things isn’t always the most moral. It’s the age old cliche of love and letting go, but the way the show has crafted this story and these characters, it doesn’t feel trite at all. In fact, we applaud the show for crafting Damon’s character in a way that has us simultaneously loving him and coping with our broken hearts.

“What does a person have to go through to get a little redemption around here?”

Leave it to the show to further switch things up on us. Katherine Pierce is not to be forgotten. She goes to Stefan’s room to talk about their night together only to discover Stefan is brushing it off as “getting caught up in the moment.” She realizes he’ll never look at her the way he looks at Elena (which is what spurs the line above). Heartbreaking! Gah, how and when did we start liking Katherine? What? What? Ugh! OK, we like her!

Luckily, she’s got a new mission besides romancing Stefan. Her ever-faithful daughter Nadia has a plan to save her life with a travelers’ spell. Katherine calls Nadia to agree to the spell. Then Katherine has a heart attack and passes out on the floor.

Oh, and did we mention Aaron goes to Dr. Wes to tell him he never wants to see him again. Yeah, he does. But not before he picks up a syringe of Wes’ vampire craving vampire compound. No big deal.