This week, Sweet Home Alabama‘s bachelorette dishes on hopping on the WaveRunner, getting in the swamp and her favorite bachelor so far. 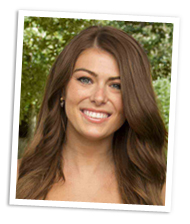 Watching the guys’ responses to Thomas Pace’s exit completely confirmed that I have an amazing group left. 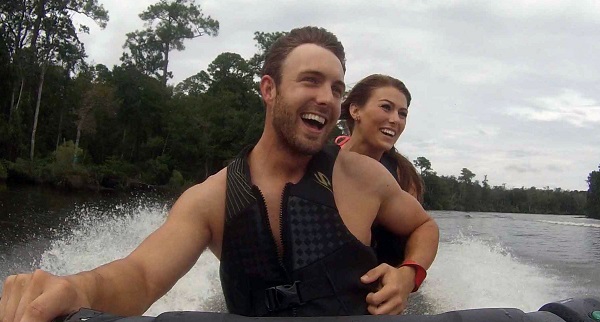 Going into my date with Collin, I didn’t know what to think. He’s incredibly attractive, and so much so that he almost seems fake and not real. I was really nervous and anxious for our date, but also excited to see how it all played out. We got on the WaveRunner and had a blast! I don’t know how he managed to not throw me off. When he turned around to face me on the WaveRunner, my heart was beating out of my chest. I knew the chemistry was there, and I knew something incredible was about to happen. And then we hit the rope swing. Collin did great, but my attempt was quite tragic: I wasn’t strong enough to pull myself up on the rope! After that, we sat down and talked about our feelings for one another. It was exactly what I needed. I could tell that he was there for me, and when we kissed in the rain, I’m pretty sure we put The Notebook to shame. That was the first time I had ever kissed anyone in the rain, and it was amazing.

The swamp was, hands down, one of my favorite activities so far. Seeing Emilio’s face and reaction to what we would be doing was priceless. I bet he never thought he would be this close to alligators.

My conversation with Travis on the air boat was a little bit off. It was very loud, and I could barely make out what he was saying, so it wasn’t the ideal time or place to get to know him better. I also spoke with Dylan out on the water, and he told me he had put up a barrier because he realized he was falling for me pretty early on. We had a great date in the beginning, and I’m not putting any walls up, so I hope he doesn’t continue to hold anything back from me because he’s scared.

Sweet Home Alabama Episode 2 recap: Who was “rude and disrespectful”? >>

I’m so comfortable around Todd, and I wasn’t lying when I told him he was my favorite so far. Seeing him smile definitely makes me smile, and I have to admit, he was great with the gators. Emilio is also very sweet. I really love his personality and was so enthusiastic about everything we did in the swamp, which I can appreciate because this is way out of his element. When Justin jumped on the boat with me, I had no idea he was going to kiss me. He’s a romantic cowboy for sure.

Since the city guys got the most gators, I went frog giggin’ with them. They all did great, and I was really impressed. Typical of Jacob to go in the water and catch the baby alligator.

Choosing Nate for the date was a no-brainer for me. He was the first city guy in the water, and he absolutely opened up and had a blast in the swamp. When I met him for our date, he walked out in a suit, and I think all the ladies reading this will agree with me when I say he’s quite attractive. Out of all the guys, Nate didn’t really stand out to me in the beginning, and I felt he hadn’t tried to interact with me much up to this point. After our date, though, my thoughts about him changed, and he moved to being one of my favorites. We had a great conversation, and he is such a gentleman. Nate definitely has my attention now.

I’m starting to have some pretty serious feelings for some of the guys, so these eliminations continue to get tougher. With Travis, I just knew the romance wasn’t there. He’s a great guy with a beautiful heart and will definitely go far in life. Danny and I had an amazing first date. He was so much fun, but I can tell our lifestyles are too different from each other. I also had to eliminate Chase because while I can see myself ending up with someone like him, I just didn’t feel we had chemistry.

Thank you all for watching this week!