The 2014 Golden Globe nominations were announced this morning, and many of the honorees have spoken about their surprise and delight at being named. 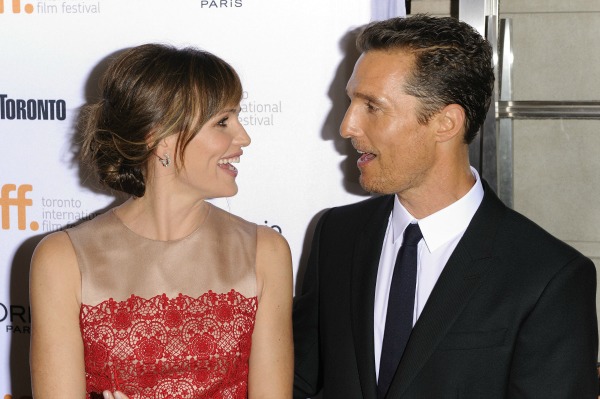 Matthew McConaughey
Best Actor in a Motion Picture, Drama for Dallas Buyers Club
“I’m excited and honored that the HFPA has recognized my performance in Dallas Buyers Club. Ron Woodroof was a revolutionary for the human spirit, and I was blessed to tell his story. I’m looking forward to spending the evening at the Golden Globes on January 12th.”

Jared Leto
Best Supporting Actor in a Motion Picture for Dallas Buyers Club
“This is absolutely incredible. I want to thank the members of the Hollywood Foreign Press Association for shining a light on Dallas Buyers Club and for celebrating independent cinema. I’m blown away by this Golden Globe Award nomination and so thankful to the incredible filmmakers for inviting me to help bring a fascinating story to the screen. This has been an unforgettable experience and I’m so very grateful to you all.”

Lupita Nyong’o
Best Supporting Actress in a Motion Picture for 12 Years a Slave
“I haven’t called anyone. I’m too overwhelmed! I’ve done a dance of joy in my hotel room. All of these nominations hopefully mean that more people will go and see it, and that is really exciting because I feel this film is pivotal and just so good for the world.”

Oscar Isaac
Best Actor in a Motion Picture, Musical or Comedy for Inside Llewyn Davis
“Joel and Ethan [Coen] have completely changed my life. There’s a reason why [this] happens to so many actors who are involved in their movies because they create a stage for people to do their absolute best work. Not only the actors themselves, but everyone involved.”

Greta Gerwig
Best Actress in a Motion Picture, Musical or Comedy for Frances Ha
“I’m so surprised and excited and honored… I found out from a phone call, I was asleep. I didn’t know that the nominations were announced today! I had read that you get a phone call really early in the morning and my phone rang and I thought I was in trouble so I ignored it and then got really anxious that I was in trouble. Then I looked at my phone and saw all these nominations — not nominations! Text messages, I only got one nomination! And that’s how I found out. I’m verklempt, is that a word? Yes, I’m verklempt. It was totally a surprise, I feel like a cliché. I seem like I am acting too surprised!”

Jennifer Lawrence
Best Supporting Actress in a Motion Picture for American Hustle
“Thank you to the HFPA. This is so exciting. I’m thrilled that the film received so many nominations and that I get to share this with the rest of the cast.”

Kerry Washington
Best Actress in a TV Series, Drama for Scandal
“I’m enormously grateful to the Hollywood Foreign Press for this honor. It’s humbling to be nominated alongside such talented and hard-working women whose work inspires me.”

Tom Hanks
Best Actor in a Motion Picture, Drama for Captain Phillips
“I’m honored. The HFPA puts on a good party and I am happy to be invited.”

Idris Elba
Best Actor in a Mini-Series or TV Movie for Luther and Best Actor in a Motion Picture, Drama for Mandela
“I’m truly humbled and honored to be acknowledged for two projects that, though very different from one another, are both extremely personal and special to me. Thank you to the Hollywood Foreign Press for your support, and I would also like to give a special thank you to Mr. Mandela, who will be forever missed.”

Emma Thompson
Best Actress in a Motion Picture, Drama for Saving Mr. Banks
“Making this film was the most satisfying and thrilling job I’ve had in years. It was a privilege to work with a team of people who couldn’t have been bettered. I’m really honored to have been nominated.”

Daniel Brühl
Best Supporting Actor in a Motion Picture for Rush
“I am deeply honored by this nomination. Thank you to the HFPA for all their support, to be nominated in the company of such inspiring and esteemed actors is incredible. Thank you to Ron for believing in me and giving me the opportunity. I am so proud the film has been recognized as well, and delighted for Peter, Chris, and the whole team. We all truly loved the experience of working on Rush and, as ever, thank you to the magnificent Niki Lauda.”

Rob Lowe
Best Supporting Actor in a Series, Mini-Series, or TV Movie for Behind the Candelabra
“I’m humbled and happy to join Matt Damon and Michael Douglas at the Golden Globes to celebrate such a special project. Candelabra was a great experience, the party continues!”

Jim Parsons
Best Actor in a TV Series, Comedy for The Big Bang Theory
“Thank you to the Hollywood Foreign Press. I know it sounds cliché, forgive me, it’s early, but this is really such an embarrassment of riches. In our first episodes of Big Bang, I felt there was something special about the show, but I never imagined any of this. I’m truly grateful and especially thrilled the show was nominated.”

Julianna Margulies
Best Actress in a TV Series, Drama for The Good Wife
“Thank you to the Hollywood Foreign Press Association for honoring our show, The Good Wife, with three nominations. We are having an amazing season, and it’s so great to be recognized by the HFPA. Congratulations to my co-star, Josh Charles, and our wonderful creators, Robert and Michelle King.”