Peaches Geldof took a cute selfie with her baby boy recently, but when she had a closer look at the picture she discovered something terrifying and supernatural. 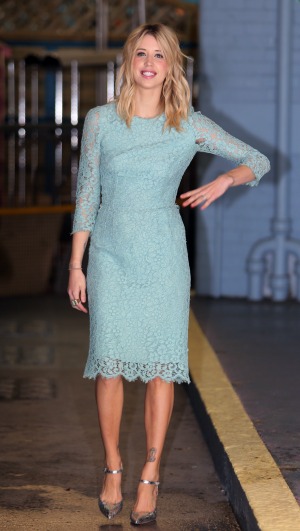 Former model Peaches Geldof found herself feeling very freaked out recently when she took a recent picture and saw there was a set of unknown fingers next to her shoulder.

Geldof has a beautiful 20-month-old son, Astala, and the pair were enjoying some quality time together when Geldof took a picture to remember the moment.

However, what she discovered left her feeling confused because she now believes the eerie shadow in the picture is a ghost and that her home is haunted.

Many celebrities have claimed to have had a supernatural encounter, but this particular encounter is rather freaky.

The star lives in a home in Kent, South East England, which she shares with her two children Astala and 8-month-old Phaedra, and her husband Thomas Cohen.

The story gets even more strange because there was an apparent suicide by a woman who lived there more than 100 years ago who gave birth to a stillborn baby.

Rose Byrne had a supernatural encounter >>

According to the Daily Mail, Geldof said: “The house was built in the 1920s by a rich man and his pregnant wife. However, his wife had a stillborn baby and was so grief-stricken she went mad. She apparently drowned herself in the bath.”

However, Peaches, who is the daughter of Bob Geldof and the late Paula Yates, does not feel afraid about this encounter and said, “The presence I feel isn’t malignant or angry, rather maternal and friendly — the house has a lovely atmosphere. Maybe she’s just making her presence known because she loves having babies around.”

On a close-up version of the photo, which Geldof posted to her Instagram account, she accompanied it with the caption: “Close up shot of the mystery ghost hand in pic I took of Astala and me in the bath!! And no that isn’t my hand – one of mine was round his waist to hold him during the photo, the other holding the camera to take the shot. Also the hand is around my shoulder so totally weird angle if I did it myself. How terrifying!! I am sh**ting myself” (sic)”