We can’t wait for this year’s Rockin’ New Year’s Eve! 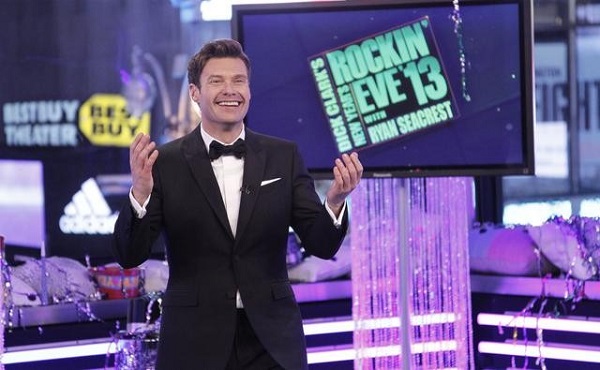 The confetti is being collected and the twinkling ball is on its way, folks. New Year’s Eve is closer than you think. No one is more excited than Ryan Seacrest. Continuing to fill the shoes of beloved New Year’s icon Dick Clark, Seacrest is set to host once again. Following suit with last year, the show will continue the carry the name of its creator: You’ll find the program listed under Dick Clark’s New Year’s Rockin’ Eve, despite the fact that the host passed away in the spring of 2012.

The New York City celebration lineup will be the biggest draw. Seacrest has raked in some huge names for the night. Miley Cyrus will ring in the New Year in New York and will be joined by Macklemore and Icona Pop, as well as ’80s rock legends Blondie. Sounds like an awesome party!

Seacrest has also lined up an interesting list of performers. The newest additions to the West Coast celebration lineup include Ariana Grande, The Fray, Daughtry and Capital Cities. They’ll join the already-announced lineup of Florida Georgia Line, Robin Thicke, Enrique Iglesias, Jason Derulo, Fall Out Boy and the lovely Jennifer Hudson. We also know the lineup for the Los Angeles-based party, hosted by Fergie.

This is only the tip of the iceberg. We also know that Seacrest and Jenny McCarthy will host the New York City party. The night will begin at 8/7c with the two-hour music special, Greatest Women in Music, which will be hosted by Seacrest, McCarthy and Fergie. And just because the ball drops at midnight in New York doesn’t mean the televised party will stop then. ABC will continue its New Year’s celebration until 2:12/1:12c. After all, they need to keep the party going on the left coast, too!

Want more TV news? Our newsletter will keep ya’ covered! >>

Excited yet? Us, too. Why fight the crowds and shiver through the cold in the real Times Square when you can watch it from your nice, cozy apartment?