Madonna has split from her young dancer boyfriend, Brahim Zaibat, after three years of dating. 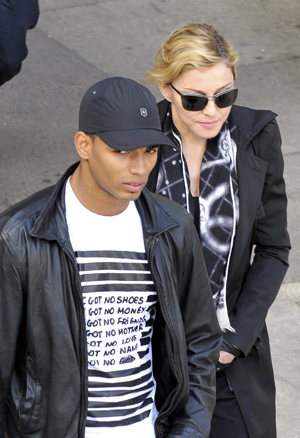 Music legend Madonna broke up with her young boyfriend, Brahim Zaibat, after dating him for three years.

According to Us Weekly, a source claimed that Madonna and Zaibat’s relationship “ran its course” because “they were dancing and working together all the time and then they barely saw each other.”

The 55-year-old pop singer began dating Zaibat, 25, in 2010 when he performed with Madonna’s daughter, Lourdes when she launched her Macy’s clothing line. After that, Zaibat went with Madonna to work as a backup dancer in her MDNA world tour in 2012.

The split doesn’t come as too much as a surprise because the odd pair was not seen together publicly since May of this year when they walked the red carpet at the Met Gala in New York City. They had actually kept their relationship on the down-low and were only seen showing PDA at Madonna’s 53rd birthday party in August of 2011.

Madonna was also spotted recently as she reunited with ex-husband Sean Penn in Haiti to offer help in that country’s relief efforts after being hit by a devastating earthquake in 2010. News of the ex-couple’s meeting sparked romantic rumors, especially after Penn attended Madonna’s MDNA concert in Los Angeles.

Madonna reveals she was raped her first year in NYC >>

“Their chemistry was off the charts,” a concertgoer told Us, adding that Penn was gushing about his ex the whole time. “She’s so hot!”

However, word is that since their fiery divorce in 1987, Madonna and Penn have actually remained close friends and the Mystic River star is even good pals with his ex’s son, Rocco. The young boy, who is 13, is the son of Madonna’s other ex, Guy Ritchie, who she married in 2000 and divorced in 2008.