Kendra Wilkinson and her family are thinking pink with baby No. 2. The reality star is ready to have her little athlete. 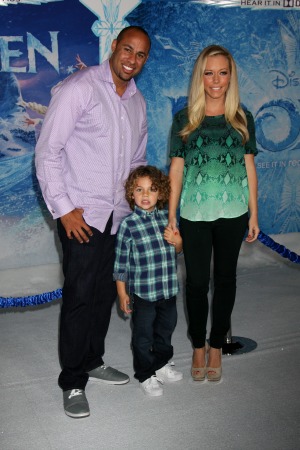 Kendra Wilkinson is getting something she always wanted: her own little tomboy! The former girlfriend of Hugh Hefner is expecting a baby girl with husband Hank Baskett.

She announced the news to OK! Magazine on Wednesday about the gender of her second child. The couple already has a son, Hank IV, who was born in December 2009.

The athletic family is hoping their little girl will enjoy sports as much as they do.

She told the magazine, “I don’t want her to feel like she has to be trapped in a girly-girl bubble.”

They are already planning the nursery to reflect their active lifestyle, but Wilkinson will embrace her daughter no matter how girly she turns out to be.

The mother-to-be explained, “We are going for unisex colors, like yellow and cream, and a unisex name. I am putting basketball shorts on her. Of course we are going to introduce her to princesses, but if she turns out girly, it will be her decision.”

The 28-year-old reality star‘s dream of a second child almost didn’t come true, though. They had a scare early in the pregnancy.

Is Julia Roberts pregnant with baby No. 4? >>

“It was an awful experience. I had to go to the hospital. I spent the whole day there knowing there was the possibility that I had had a miscarriage,” she said.

The growing family was relieved to learn that baby Baskett was going to be OK, but they decided to fast-track learning the sex of their child.

“With a new DNA blood test we didn’t even have to wait for an ultrasound. We are people that don’t like to be surprised or thrown off,” said Wilkinson. “We want to be settled and prepared and to make life as easy as possible.”

While mom is excited about having a girl, it sounds like dad might need a little time to adjust to the news.

She laughed, “Big Hank is terrified about having a girl. He is terrified! The first thing he said when I told him we were having a girl was, ‘Oh, my god, how do I wipe her?’ His eyes were filled with fear. His whole life just flipped upside down. I think he was in shock.”

With the baby not due until Spring 2014, the former NFL star still has time to get used to the idea of thinking pink. In the meantime, Wilkinson is thrilled that her family plan has worked out.

She said, “I have always wanted to have my second baby before age 30 and before our five-year wedding anniversary.”