Edging out a pool of finalists including President Obama and Miley Cyrus, Pope Francis landed Time‘s title of 2013’s Person of the Year. We ponder the top 5 (among many) reasons this pontiff has made such an impression. 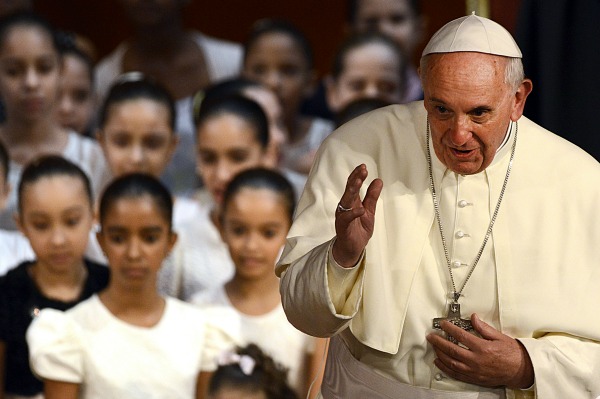 In its cover story, Time explained their nod to the pontiff, saying, “What makes this pope so important is the speed with which he has captured the imaginations of millions who had given up on hoping for the church.” That rings true — rarely in papal history has a pope endeared himself so much to the world that people from all manner of religions admire him. In March, a new song celebrating Francis surfaced called “Come Puoi” (“How You Can”). And as of May, papal souvenir sales were on the rise (“Pope-on-a-Rope” keeps popping into our heads, but we’re 70 percent sure that’s not what “papal souvenir” means).

He loves people — all people

When it comes to shaking hands and kissing babies, Pope Francis is a pro. But in all seriousness, the images are beautifully haunting: Pope Francis kissing the face of a man with severe genetic deformities; Pope Francis washing the feet of AIDs patients; Pope Francis playing with an orphan. In his brief time thus far as Pope, he has made it clear that he embraces tolerance for all people, including those historically frowned upon by the Catholic church. “Tell me, when God looks at a gay person, does he endorse the existence of this person with love, or reject and condemn this person? We must always consider the person,” he said in July, taking a far different stance from past popes on the subject of homosexuality. Francis has further spoken out in favor of compassion toward atheists and illegal Muslim immigrants and, in addition, has called for leaders of all faiths to engage in more dialogue with each other to create “true links of friendship between all people.”

Prior to becoming Pope, Francis — born Jorge Bergoglio in Buenos Aires — developed a reputation as an extremely humble man. He was dubbed a man of the people, which has proven to be a nickname with staying power. And really, he is in many ways kind of like a normal man. After all, he pulls his pants on one leg at a time, papal though they may be. What really stands out about Pope Francis’ approach to the papacy is his informal approach. Unlike his predecessors, Francis opted to reside in the Domus Sanctae Marthae guesthouse as opposed to the papal apartments of the Apostolic Palace — enabling him to receive visitors and offer counsel, and making him the first pope since Pius X to live outside of the official papal residence. On the night he was appointed, Francis skipped the papal car and instead hopped a bus back to his hotel. Also of note? He prefers to wear simple white vestments, a stark contrast to the ostentatious red, ermine-trimmed mozzetta cape of yore.

When asked why he chose the name Francis, the Pope informed journalists he chose the moniker after Saint Francis of Assisi in honor of the saint’s concern for the poor. “He brought to Christianity an idea of poverty again the luxury, pride, vanity of the civil and ecclesiastical powers of the time,” Francis elaborated. “He changed history.” In a nutshell, that has been this pope’s guiding principle. Not only has he encouraged global leaders to shun excessive riches and the “cult of money,” but the pontiff also abolished bonuses paid to Vatican employees when a new pope is elected — he mandated the money, which is rumored to add up to several million Euros, be given to charity instead. He didn’t stop there, though: he also banished Germany’s Bishop Franz-Peter, who is infamously known as the “Bishop of Bling,” after learning the overspender may have dropped as much as $55 million renovating his residence (including a $20,000 bathtub, which gives holy water a whole new meaning).

He challenges the church to do better

In their explanation of dubbing Pope Francis Person of the Year, Time referenced the complicated relationship between the Catholic church, its 1.2 billion followers and its image to the rest of the world. “As Pope, he was suddenly the sovereign of Vatican City and head of an institution so sprawling — with about enough followers to populate China — so steeped in order, so snarled by bureaucracy, so vast in its charity, so weighted by its scandals, so polarizing to those who study its teachings, so mysterious to those who don’t, that the gap between him and the daily miseries of the world’s poor might finally seem unbridgeable,” the magazine said. “Until the 266th Supreme Pontiff walked off in those clunky shoes to pay his hotel bill.” Whether washing and kissing the feet of female (a big no-no) juvenile offenders and whispering to them, “Do not let yourselves be robbed of hope,” or choosing to speak in the everyday language of the Holy See, Pope Francis has proven he is a man of steadfast morals and devotion to the people. Having already called out the Catholic church for locking itself up “in small-minded rules,” the new pontiff asserts that the confessional “is not a torture chamber, but the place in which the Lord’s mercy motivates us to do better.”