Drew Barrymore revealed the gender of her second baby as she was being honored at a beauty awards ceremony in New York City. 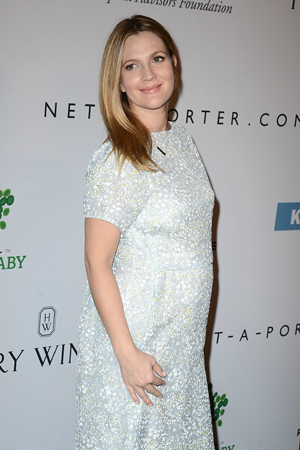 While being honored with the “Newcomer of the Year: Mass” award at the 2013 Beauty Inc Awards in New York City on Wednesday, Dec. 11, Barrymore told the crowd she was expecting another girl during her speech, Us Weekly reported.

“Thank you to WWD Beauty Inc for awarding Flower Beauty,” Barrymore said as she received her accolades. “I am so proud to accept this in celebration of women, including my daughter and my future daughter.”

Barrymore, 38, continued, “I have grown up in a makeup chair. I loved watching women in this aspirational environment. It was and always will be important to me to send messages of empowerment. And on a business level, I wanted to give women the finest formulas. They deserve to have that level of quality, and I wanted to be the brand that delivers that to them.”

Accompanying the actress to the event were her husband, Will Kopelman, her sister-in-law, Jill Kopelman, her mother-in-law, Coco Kopelman and father-in-law Arie Kopelman, who was the former chairman of Chanel. Apparently, Mr. Kopelman is referring to his future granddaughter as “Chanel No. 5” as she will be his fifth grandchild.

Drew Barrymore raising her daughter in the Jewish faith >>

The Charlie’s Angels star and her husband, 36, first announced their second pregnancy in early November, and her baby bump was quite apparent at the beauty awards. The actress looked super-classy in a Helmut Lang suit paired with a Ted Baker top and Alice and Olivia shoes.

Barrymore launched Flower Beauty in January of 2013 and her affordable products have already become popular with daily users as well as cosmetic professionals.